Yoga: the gift of life 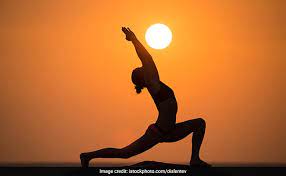 In this hectic life of stress and anxiety, everyone desires good health free from any diseases. It is the utmost goal of human life. It is difficult to maintain health when people are trapped inside their tight schedule, and are constantly around technical gadgets. But can you imagine? Just taking out at least 15 minutes of your 24 hours schedule can save your degrading health. YES. It is possible, and the answer is...YOGA.

Yoga is an ancient physical and spiritual discipline, which has become widely popular and is recognized as a way of life. The word yoga is derived, from the Sanskrit word “Yuj” – which means the union of the body, mind, and soul to achieve personal balance in life.

Yoga is expected to be found over 5,000 years ago in ancient India, and now yoga is popularly being adopted as a practice to bring about a state of equilibrium, improved physical health, better mental control, and self-realization.

It requires slow and safe movements of the body with normal, controlled breathing. To make people aware of yoga and its benefits, all over the world an international level event was suggested by Prime Minister of India Narendra Modi and has been declared by United Nations General Assembly to celebrate it annually on 21st June and called it International Yoga Day.

Yoga is believed to be originated, from the very dawn of civilization thousands of years ago. It is said to be existing since before the first religions or belief systems were born. According to the yogic lore, Shiva is seen as the first Yogi or Adi Yogi also the first Guru or Adi Guru.

The historical seals and fossils found in the Indus valley civilization depicting figures practicing Yoga indicate the presence of Yoga in Ancient India. The phallic symbols, seals of idols of the mother goddess are suggestive of yoga. The shreds of evidence of the existence of Yoga can be seen since the pre-Vedic period. The major sources from which we get the information about Yoga Practices and the related literature during this period are available in Vedas, Upanishads, smritis, the teaching of Buddhism, Jainism, Panini, epics, puranas, etc.

A few centuries after Patanjali, often known as the father of yoga, other yoga masters created a system of practices designed to rejuvenate the body and prolong life. They neglected the teachings of the ancient Vedas and developed Tantra Yoga, with fundamental techniques to scour the body and mind to break nodules that bind us to our physical existence. This exploration of these physical-spiritual connections and body-centered practices led to the creation of what we now know as hatha yoga.

In the era of late 1800s and early 1900s, masters of yoga began to travel to the west, attracting the attention of people there and gaining more followers. It began at the 1893 Parliament of Religions in Chicago when Swami Vivekananda swayed the attendees with his lectures on yoga and the University of the World’s religion. In the 1920s and 30s, hatha yoga was promoted strongly in India, thanks to the chore done by T. Krishnamacharya, Swami Sivananda in the field of Hatha yoga. Krishnamachaya was the first to open the Hatha yoga school in Mysore in 1924. Sivanada was a prolific author, writing over 200 books on Yoga, and has established nine ashramas and numerous yoga centers around the world.

Yoga is a lenient physical practice that can be practiced by anyone whether it is an old age person or a child. Yoga is even more beneficial for women about to be mothers.

Yoga consists of many exercises including breathing techniques, meditation, body poses known as asana which enhances the overall health of the body. Yoga is classified into four parts:

1. Karma yoga: this teaches us to perform one’s duty without getting attached and without being greedy towards the reward.

2. Jnana yoga: it teaches a person to merge with inner self by practicing mental techniques and meditation.

3. Bhakti yoga: in this practice, individual creates their focus around God and dissolve themselves in his service.

4. Kriya yoga: this ensures the development of body, mind, and soul takes place. By this practice, the entire human body can be energized in a short period.

If you manage to take out just 15 minutes regularly from your schedule you can improve your health in a humongous way because practicing yoga has numerous benefits.