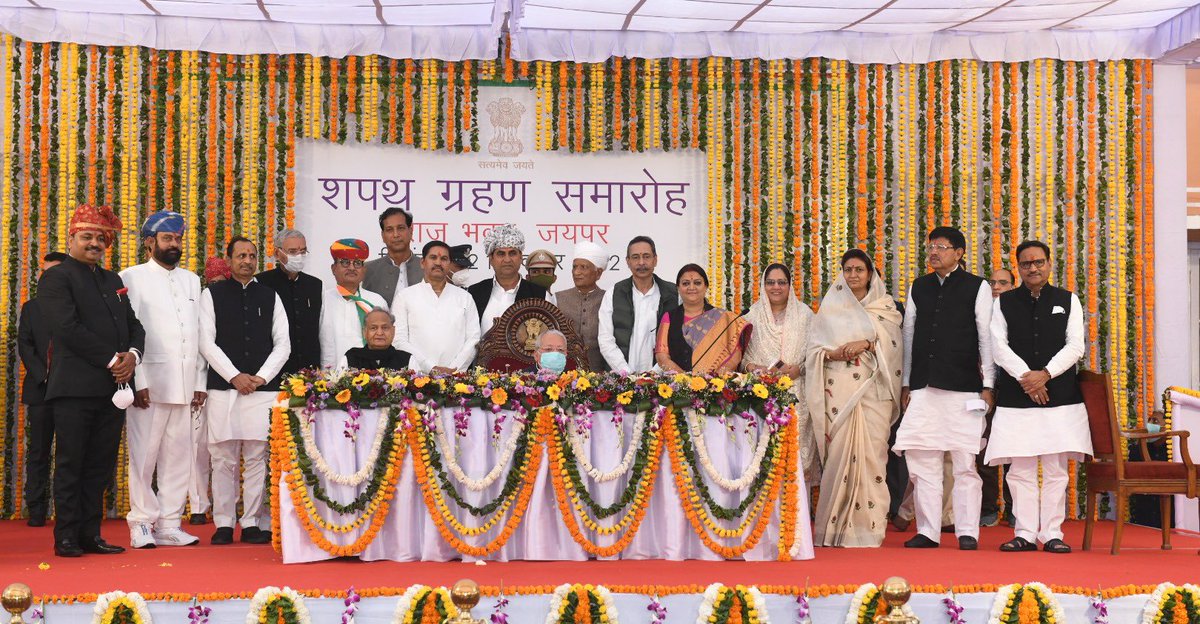 "The contribution to the governance of individuals who could not be inducted into the cabinet is no less than those who have been made ministers today," the Chief Minister said this afternoon in a balancing effort.

Sachin Pilot, whose open defiance had thrown the ruling Congress into disarray last year, now put up a united face, insisting that "there are no splits within the party." He told reporters, "We all work under the guidance of the Gandhis." Sachin Pilot announced today that the latest measure aims to give equitable representation to all groups of the state, including tribals, Dalits, and women. According to him, the new cabinet includes four Dalit ministers. Only three ministers have been replaced: Govind Singh Dotasra, Harish Chaudhary, and Raghu Sharma.

This is the Gehlot government's first cabinet reshuffle since taking office in December 2018. Other ministers resigned in a meeting of the council of ministers on Saturday, while Dotasra, Chaudhary, and Sharma quit on Friday.

The Congress cabinet led by Ashok Gehlot would have 30 ministers in all, including 18 who quit earlier.A total of 30 ministers, including the chief minister, are allowed in Rajasthan.Three state ministers (those who have been raised to cabinet positions) come from the SC community, according to party sources.

The new state cabinet would contain four SC members and three ministers from the Scheduled Tribe (ST) community, as well as three women—a Muslim, an SC member, and a Gujjar—according to the sources.

During a political crisis in the state last year, Vishvendra Singh and Ramesh Meenawere fired as cabinet ministers.

Former MP Govind Ram Meghwal, another SC member, is a new face in the revamped government.

One of the six BSP MLAs who defected to the Congress, Rajendra Singh Guda, has been appointed as a minister of state.There have been no appointments to ministerial positions for independent MLAs, while several have been appointed as parliamentary secretaries.Sachin Pilot met with senior Congress leaders in Delhi, including Rahul Gandhi, Priyanka Gandhi Vadra, and party chairwoman Sonia Gandhi, in advance of today's reshuffle. Mr. Pilot expressed his satisfaction with the adjustments today.Last year, Sachin Pilot spearheaded a revolt against Mr. Gehlot. He'd been waiting since then for the Chief Minister to reshuffle his cabinet to accommodate his followers, as part of the Congress's arrangement to avoid losing yet another state.

Cabinet Reshuffle : Who gets What?