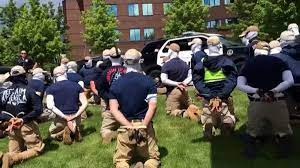 Dozens of supposed White nationalists were arrested on Saturday during a Gay Pride parade in the city of Coeur D’Alene, Idaho.

Idaho police confirm that over 30 masked men packed in a U-Haul truck approached the gay pride parade, which was being held in a public space. They all wore navy suits and shirts and wrapped gray masks across their faces. The police were first notified of this when a concerned bystander called to say they saw at least 20 men enter a U-Haul truck all wearing the same gear, almost like a “little army”. They also were found carrying riot shields, and at least one of them was found possessing a smoke grenade.

"It is clear to us based on the gear that the individuals had with them, the stuff they had in their possession and in the U-Haul with them, along with paperwork that was seized from them, that they came to riot downtown," stated Lee White, the Coeur D’Alene police chief during a news conference.

Many of the men had patches on their clothes that identified them as members of the White supremacist group called Patriot Font. The Anti-Defamation League, an organization that fights forms of intolerance and bigotry, states that the beliefs of the Patriot Front include, “...that their ancestors conquered America and bequeathed it to them, and no one else.” Members of this group are extremely against immigration and cultural integration, and they spread their beliefs online through posters and banners.

Police chief Lee White later stated that when authorities further searched the U-Haul, they found in writing a “master plan” to riot and take over the Gay Pride parade. Based on the evidence, police determined they were in fact conspiring to riot and arrested 31 of the masked men.

Today, the police released mugshots of the people who were arrested. They have all already posted bond and are no longer in custody, but are expected to return to court at a later date. Among the arrested include the leader of the Patriot Front, Ryan Rousseau, who has an extensive history of adhering to white supremacist principles. Despite many obstacles and efforts made by white nationalists, the Gay Pride parade managed to end in a momentus and safe way, with no one hurt.