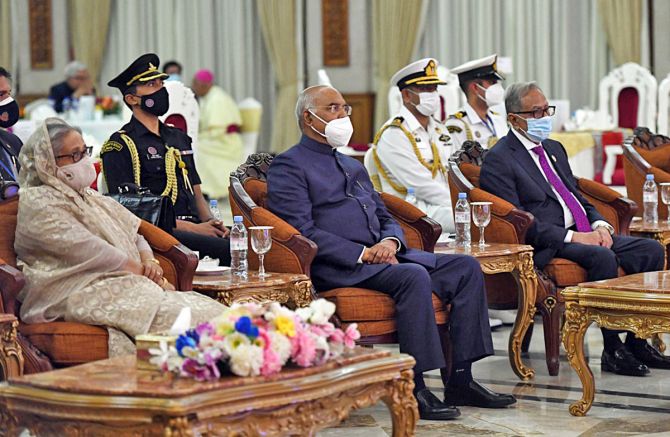 Dhaka: President Ram Nath Kovind arrived in Bangladesh for a three-day State visit to meet the leadership and attend the golden jubilee celebrations of Bangladesh's independence, which marks the first travel made by President Kovind outside India since the COVID-19 pandemic broke out. He is attending Bangladesh's 50th Victory Day festivities as a special guest of India. India is also conducting a series of events to commemorate the 50th anniversary of the 1971 India-Pakistan war and the eventual formation of Bangladesh.

On the first day of the President's three-day visit to Bangladesh, Bangladesh Prime Minister Sheikh Hasina interacted with him in Dhaka. Here, the two leaders discussed matters of mutual interest and bilateral cooperation. According to a tweet from the Rashtrapati Bhavan, both the officials discussed issues about the nations' common interests and assessed the progress in the multi-faceted and comprehensive bilateral ties. In their joint observance of Mahavir Diwas on December 6, the two leaders remembered the spirit of the 1971 Liberation War, said MEA spokesperson Arindam Bagchi.

Bangladesh's foreign minister, Dr. A.K. Abdul Momen, spoke with President Ram Nath Kovind, congratulating him on the commendable progress made in bilateral cooperation and potential cooperative initiatives, particularly in the field of connectivity.

Foreign Minister Momen informed the media following Prime Minister Hasina's meeting with President Kovind that she assured the Indian leader that the two nations had already handled numerous lingering bilateral issues and that the rest will be resolved through dialogue. Sheikh Hasina stated that cooperation between Dhaka and New Delhi ensured peace in the region. According to Momen, the Prime Minister reminded the Indian President that Bangladesh was obligated to promote interfaith harmony in the country, as the country’s heritage doesn’t appreciate viewing any (religious) community as a minority group.

He was guarded of honour by the Bangladesh Army, Navy, and Air Force upon arrival at the airport and then escorted in a motorcade to the National Memorial near Savar on the outskirts of Dhaka.

He toured the Bangabandhu Memorial Museum later that day with Sheikh Rehana, the youngest daughter of Sheikh Mujibur Rahman. Rehana showed him around the museum, which used to be the late leader's private mansion. It was here that Mujibur Rehman, along with his family members was assassinated in an unsuccessful coup on August 15, 1975. Hasina and Rehana were on a trip overseas when the putsch occurred.

In the visitors' book, Kovind wrote that he was honoured to visit Jatiya Smriti Shoudho, which bears witness to the beloved leader, Sheikh Mujibur Rahman's life and works. It also showcases the valour and conviction of the people of Bangladesh against tyranny and injustice.

He is the sole foreign head of state invited to the celebrations, which coincides with Bangabandhu Sheikh Mujibur Rahman's birth centennial and the 50th anniversary of Dhaka-New Delhi ties.

President Kovind’s Schedule for the visit

On arrival, President Kovind was greeted at the Hazrat Shahjalal International Airport by Bangladesh President Hamid on Wednesday before traveling to Savar to attend the National Martyrs' Memorial. He then paid respects to Bangabandhu Sheikh Mujibur Rahman at the Bangabandhu Memorial Museum on Dhanmondi Road 32. In the afternoon, he met Bangladesh Prime Minister Sheikh Hasina, and in the evening, he visited President Hamid at the Bangabhaban.

On December 16, President Kovind will be the special guest of honour at the event commemorating Bangladesh's 50th Victory Day at the National Parade Ground. In the afternoon, he will participate in another event at the South Plaza of the National Parliament. The President of India will inaugurate and inspect the freshly rebuilt section of the Kali Temple at Ramna in Dhaka on the third day of his visit. He has indicated an interest in discussing his ideas with members of the temple's relevant committee. President Kovind will gift President Hamid of Bangladesh with a T-55 tank and a Mig-29 fighter plane used during the Liberation War during his visit. According to AK Abdul Momen, these will be shown at the National Museum. Dhaka will also host a delegation of Indian combat veterans.