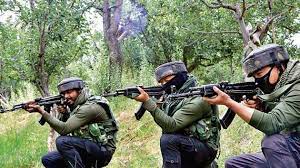 In an engagement with security troops in south Kashmir, six JeM militants were killed.

Six Jaish-e-Mohammad militants, along with a Pakistani citizen, was killed by security services in two distinct confrontations in Jammu and Kashmir's Anantnag and Kulgam regions.

Mohammad Shafi Dar of Tral (JeM) and Uzair Ahmed of Mirhama, according to a police spokesperson, were the militants murdered in Kulgam. Both were members of the JeM terrorist outfit's C grade of militants.

Security personnel cordoned the region and conducted a search operation on Wednesday night after obtaining intelligence indicating the existence of terrorists in Nowgam Shahabad in Anantnag district, according to a police official.

During the inspections, militants opened fire, prompting a clash between security officers and insurgents. Three militants were killed in the exchange of fire, while a police officer was wounded and sent to the hospital, according to the official.

Sultan, alias Rayees, alias Mavia (a foreign national), Nisar Ahmad Khanday of Dudwangan Kapran, and Altaf Ahmad Shah of Nathipora Dooru were among the militants killed during  the encounter.  Altaf and Sultan were the one to be involved in the Zewan attack on the police bus.

Two AK47 and one M4 weapon, as well as ammo, were found from the encounter scene. One Pakistani militant, Shahid Shahzaid, who was named among the top most wanted list of militants in J&K, was also slain in the encounter.

In the past week, military actions against terrorists in south Kashmir have exploded, resulting in gunfights. Five militants were killed in three different gunfights on Sunday in the Shopian, Pulwama, and Anantnag districts of south Kashmir. According to police sources, the increase in gunfights is due to changing weather and snow in the valley's upper reaches.

"At this time of year, there is generally an uptick in shootouts," a senior police official stated. "As the temp decreases and the snow falls in the higher elevations, the rebels forsake their winter bunkers in the woods and retreat to the villages. As a result, more data is acquired and more shootouts occur.