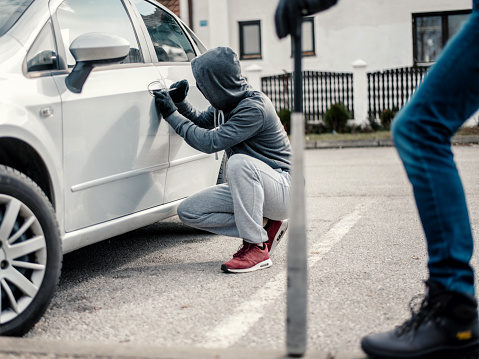 The man went out to refuel his WagonR so that he could take his son to the exam the next morning. And the next day two men tried to steal the vehicle, the man tried to stop them by hanging on to the door. When they were about to drive off, the man grabbed the driver by his collar and did not let him go. Following this, the driver accelerated the car even though the elderly man raised an alarm. As the car started moving, the man was Clunged on the car and was dragged for several meters following which he fell on the road unconscious. In few minutes ambulance arrived, as people around him called for help, and took him to hospital.

The man’s wife, Vijaya Rana who also works at a government school, said ,” He went out that night to get gas so he could take our youngest son to his test center the next day. We can't believe that he is nobody to us, she always wants to do good for others, he dreams big for his children and grandchildren”.

In addition to this she added, “My husband was excited to get his son to get a job in the government. I don't know if the man followed him. The car is not new and we bought it 10 years ago. But yes, my husband had one lakh in the car he needed for his personal work, but he was in a hurry and he forgot to take it out”.

In the course of the investigation, police announced on Saturday that a car thief had been caught. DCP Pranav Tayal identified the defendants as Kapil Tiwari, 27, and a 17-year-old boy. After the incident escaped, they left the car in Shahbad Dairy. Police officials later said the defendant was drunk at the time of the incident and was previously involved in criminal proceedings, including theft.

The doctors said despite of his age he was physically strong and defended himself well but also broke his rib in the incident. It is really sad how a car theft turn into a death of a person. The police need to tighten up the security for common people.