A Businesswoman Has Been Attacked By Jihadists In Kerala 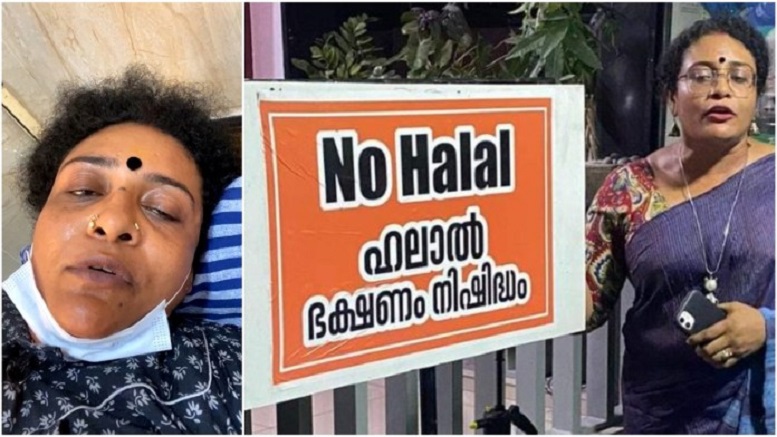 Thushara Ajith, a businesswoman, was attacked for displaying the board "non-halal food'' at her restaurant in Kochi, Kerala. Thushara was rushed to the Amritha hospital after two men allegedly assaulted her and her workers at the new branch in Palarivattom. Vinoj George, one of the accused too, has been admitted to the hospital after allegedly being assaulted by two of Thushara's accomplices. Thushara herself informed her hospitalization through her Facebook live.

She had been planning to inaugurate her new branch of a restaurant in Palarivattom today. However, many showed abhorrent attitudes towards the idea of putting a no-halal board in there. Some of them were threatening her and warning her not to serve pork. The underlying reason for Thushara's attack, she claims, is because of the non-halal board and the serving of pork in her restaurant. In her video message, Thushara Ajith Kallayil, the victim, accused the police and administration of filing charges only against her, saying the one who attacked her is still free. She also claims that the police are waiting outside her hospital room to arrest her. She added that economic jihadists are attempting to wipe out Hindu enterprises in Kakkanad and around Ernakulam.

Thushara rose to popularity after launching Nandhuzzz Kitchen, the first non-halal-type eatery in Palarivattom, on January 15, 2021, and boldly declaring that she would only sell non-halal food. Even though the restaurant has a huge number of clients, she has just been serving lunch only. The hotel never served meals prepared on the previous day since the leftovers were donated to orphanages. Her success moulded her to expand her eatery business more and she took some space in Kakkanad, near Infosys.

Thushara claims that she has been receiving threats for the past week, claiming that she will be barred from displaying non-halal food boards or serving pork in Kakkanad. But, courageous Thushrara went to dare and was about to open the place when the incident occurred. However, trouble happened when she visited her eatery a couple of days back.

Thushara's daughter stated, jihadist tore of her mother's clothes, punched her face and chest, kicked her stomach. Her daughter added that Thushara is urinating blood that led to her hospitalization, and she has marks of the scuffle on her body.

Her coworkers rushed to her aid and used their kitchen knives to fight against the abuse. Despite her efforts to contact the police, they refused to record her complaint and accused her of selling non-halal food. The police circle inspector questioned her about why she used the non-halal board. According to Thushara, the police have even filed charges against her husband Ajith, who was not even present at the time of the incident. Thushara blamed the current government for all the things which are happening in Kerala right now. She also added that she is not going to take that board away whatever happens.

Many people came to support Thushara; including politicians and Hindu organizations. State BJP president K Surendran commented on Twitter, Talibanism is exactly what happened in Kakkanad.