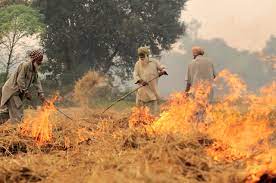 Recently, A Low Cost technology product in the form of capsules has been developed by the Scientists at the Indian Agricultural Research Institute (IARI) in Pusa. This has been looked to as a solution to managing crop residue and control stubble burning. These capsules which would be called the Pusa Decomposer would assist the land in sowing of the next crop and would restrict the farmers from choosing stubble burning as an option.

The Solution to Crop Burning is rated at 4 Capsules for 20 Rupees. Stubble Burning has been said to be among the major causes of air pollution for several years in the Northern States of Delhi-NCR, Haryana, and Punjab. Stubble burning has proven to be a huge difficulty as it increases the Pollution levels and in the Winter Months, there are reports by many residents of Delhi and NCR choking on these rising pollution levels. The stubble-burning method was practiced due to being cost–effective on the cost of creating Pollution.

The Low – Cost technology developed has been called decomposer capsules would be a composition of eight microbes and would help the farmers accordingly. This procedure of converting crop residue to manure is most likely to go on its working model by the end of September where it would be finally reviewed and brought for the masses.

The development has been seen as a great achievement and would be very essential to restrict the cities from turning into gas chambers. Gopal Rai, The State environment had remarked that The Centre would act as the nodal agency and accordingly speak to the states of Delhi, Punjab, Haryana, and Uttar Pradesh to initiate Pusa's bio-decompose procedure. He also stressed the need for a central policy too which can be later implemented by the states together.

These Pusa Decomposer capsules are said to reduce the time it takes to decompose paddy straw and help make the process convenient. While Stubble Burning erodes the soil quality and creates pollution, these will help make the soil more fertile and help to restrict pollution. An additional advantage of these capsules would be that they would help reduce the dependence on fertilizers in the long run and make the process more cost-effective.

Dr. YV Singh, a Senior Scientist at IRAI remarked that the four capsules in one pouch can be used to make 25 liters of solution which can then be used on one hectare of land and make the land more fertile. This Practice would ultimately help to curb Crop Burning and can be used in all farms or any form. The Product that has now been developed was being worked over for the past 5 years and they believe that mass distribution would be the key to help articulate this to the masses.

According to The System of Air Quality and Weather Forecasting and Research (SAFAR), Data showed us that Stubble burning in Punjab and Haryana contributed to around 44 percent of the pollution in NCR Delhi. This product will ultimately solve Two Major Objectives by not only making the soil fertile but also fighting and controlling the levels of pollution.

The Residue Burning makes the land unproductive to which this capsule can convert into manure thereby making the process more cost-effective and convenient. The CM of Delhi – NCR, Arvind Kejriwal has extended his support to this product and has already been looking forward to starting to implement this method in Delhi.

He has also said that he would urge The Union Environment Minister, Prakash Javadekar to ask neighbouring states to make the best use of the Pusa Decomposer and implement it soon. The Use of Pusa composting capsules is now under consideration and is yet to be finally reviewed for its implementation process.