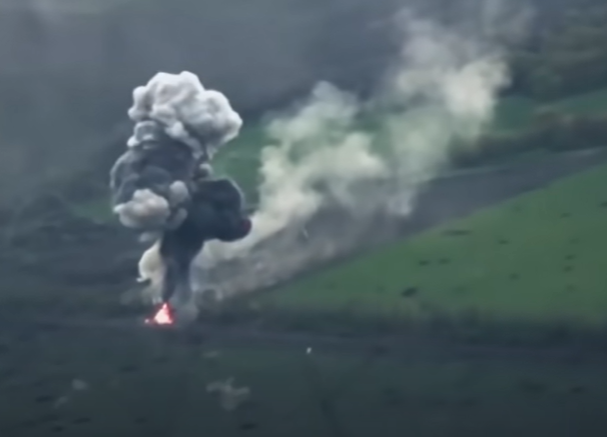 Multiple reports from The Sun suggest that there have been continuous attacks on a Russian tank in the Kharkiv region, yet the intention of the responsible group is still unclear.  More reports bring forward how multiple areas controlled by the Russian military have been repeatedly struck. Nonetheless, reports have been confirmed from The Sun that the footage showing a Russian tank on fire is from Russian-controlled Izyum, in Ukraine’s Kharkiv Oblast, which had ongoing disagreements between the Russians and the Ukrainians.

Within the footage, it is clear how the Russian tank has been destroyed by the attack, as it is consistently releasing huge amounts of smog. Further footage from the drones has revealed that the Russian soldiers are fleeing from their base, which has been reported to be struck by the Ukrainian Mechanized Brigade. The footage also shows how multiple (at least two) buildings are constantly on fire, with so far zero casualties.

However, other reports have surfaced on social media, suggesting that the Russian military is also attacking Ukrainian targets. Although it is very clear in the footage that the tanks destroyed were Ukrainian tanks, there is still not much evidence from the Russian side to confirm this. Reports highlight this footage be a hoax and false advertising.

Nonetheless, other reports indicate that a Russian chemical plant has also been lit up in the fire, to undermine Moscow for Kremlin’s invasion. This would mean that the tensions between the Russians and the Ukrainians will continue to heighten leading to more civilians becoming the victims of this war. The explosion took place in a factory 250 miles east of Moscow. This factory contained large rail tankers filled with solvents when massive explosions broke out. Numerous reports also suggest how 900 workers have made unlisted attempts over 9 hours to put out the fire, which had reached over 2500 square meters.

Other areas that were targeted included an enlistment office and explosive plants. Reports have confirmed that approximately 22 people have been killed during a fire in the defence ministry’s missile design research institute. Nevertheless, these attacks have been said to be done by Ukrainian forces. The Centre For Strategic Communications of AFU (Armed Forces of Ukraine) has released a video message ‘Make it clear who is the master here!’. Yet the evidence confirming the same remains vague.