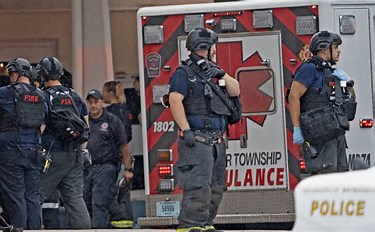 Today in a mall near Indianapolis, Indiana there was a shooting that killed three and injured two. The shooting took place approximately around 6:00 pm by a twenty-two-year-old male. However, the gunman was stopped relatively soon by a ‘good samaritan’ who was also carrying a firearm.

The 22-year-old gunman had a rifle that could shoot hundreds of bullets because of its type and the gunman had multiple backup magazines with him. He arrived at the mall's food court with his assault weapon at approximately around 6:00 pm planning to kill as many people as possible. The gunman also had a suspicious backpack with him that was later confiscated by the authorities once the situation had been resolved. However, this was after the death and mutilation of 3-5 people had already happened.

The gunman was stopped by not the police officers on the scene but rather by a random person within the mall that took it upon himself to stop the gunman. When the gunman started shooting strangers in the food court, the stranger noticed and drew his own weapon and shot at the unhinged individual. The ‘good samaritan’ did manage to kill the mass shooter and stop him from killing anyone else, so this stranger could be thanked for his quick thinking.

The local assistant chief of police (Chris Bailey) of the area had this to say about the situation: “We are sickened by yet another type of incident like this in our country…” Numerous other local authorities came out to support those affected by the mass shooting, but they were split on the issue for a couple of reasons.

Some saw the situation as another reason for more strict gun control laws because of a mentally ill person being able to kill a large number of innocent people. They also found the ‘thoughts and prayers’ of officials and authorities to be hollow. On the other hand, there were some that said that this was a sign to loosen gun control laws because of the counter shooter. They claim that if guns were easier to get, then there would be more people like him and there would be fewer mass shootings.

Regardless of what side you’re on, there was a major loss of life and sense of safety today in Indiana.