Africans and Non-Whites Facing Discrimination in the Ukrainian Crisis 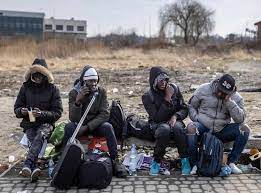 Africans and other non-white people have been facing racism and discrimination while attempting to flee Ukraine. The Nigerian presidential spokesperson Garba Shehu stated, “There have been unfortunate reports (that) Ukrainian police and security personnel are refusing to let Nigerians board buses and trains.” Immigrants have claimed that Polish border officials are refusing Nigerians and other Africans from crossing the border to safety. Africans in Ukraine and around the world have taken to their social media platforms to voice their concerns and are calling upon their respective government officials to demand respect, dignity, and equal treatment for their subjects.

Amidst the recent invasion of Ukraine by Russia, inhabitants have been fleeing to neighboring countries such as Poland, Romania, Slovakia, and Moldova. As of Monday, February 28th, the UN reported that more than 670,000 people are refugees from Ukraine due to the conflict. According to the International Organization of Migration, over 470,000 out of the 41 million Ukrainian population are immigrants. A large number of the immigrants are African students and migrant workers.

The evident racist precedence over human rights needs is a concern for black Africans and non white people throughout the world. A statement released by the African Union is labeling the dismissal of African lives and safety as a breach of International Law. In a report published by the AU on Monday, February 28th, the two chairpersons of the AU, H.E. Macky Sall and H.E. Moussa Faki Mahamat “urge all countries to respect international law and show the same empathy and support to all people fleeing war notwithstanding their racial identity.”

Saakshi Ijantkar, an Indian fourth-year medical student from Ukraine told CNN: “They (Ukrainian Guards) allow 30 Indians only after 500 Ukrainians get in. To get to this border you need to walk 4 to 5 kilometers from the first checkpoint to the second one. Ukrainians are given taxis and buses to travel, all other nationalities have to walk. They were very racist to Indians and other nationalities.”

Ukraine’s Minister of Foreign Affairs Dmytro Kuleba took to Twitter on March 1st to condemn the discriminative treatment of Africans by tweeting, “Africans seeking evacuation are our friends and need to have equal opportunities to return to their home countries safely. The United Nations High Commissioner for Refugees Filippo Grandi also condemned the racist actions by stating: “There should be absolutely no discrimination between Ukrainians and non-Ukrainians, Europeans and non-Europeans… (UN) plans to intervene to try to ensure that everybody receives equal treatment.”

The struggle non-white people have been facing in these troubling times has urged the American musician Young Thug to offer his help to Africans get out of Ukraine. In a recent Instagram post, Young volunteered to aid Africans and called on his “rap brothers” to reach out to him in an effort
to collaborate on their quest. Thug wrote in his Instagram post, “if some of my rap brothers are in, I’m willing to help Africans get out of Ukraine however I can sense (since) they not letting us pass.”

The discrimination non-white Europeans are facing in the chaos brought upon by Russia has been making people question whether we are all in this together. Numerous people have concluded that racism is taking precedence over human rights.

2 months, 1 week ago by Eliama

Very insightful article. It really is devastating to hear that even in times of crisis, racism still has a place. Thank you for shedding light on this important issue.

The state of Ukrainian refugees