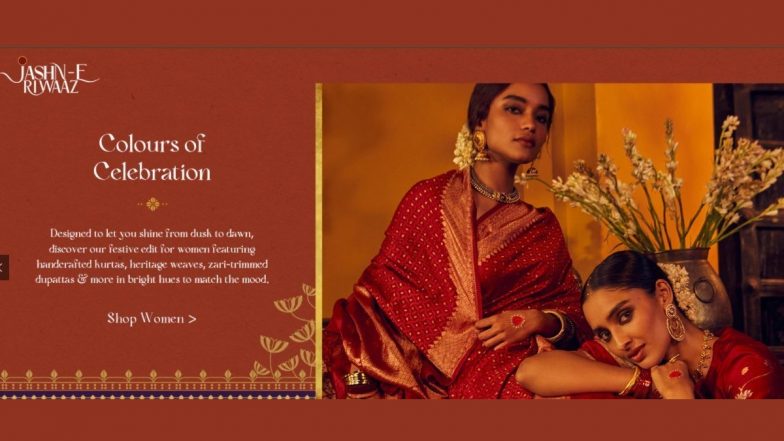 After receiving a barrage of criticism and bullying on social media, popular clothing manufacturer Fabindia has taken down an advertisement for its upcoming Diwali collection. By calling Diwali Jashn-e-Riwaaz, the firm was accused of "defacing" the Hindu celebration of Diwali. Many users blasted the company for promoting secularism and Islamophobia during a Hindu festival when it wasn't necessary.

Fabindia, a clothing retailer, sparked outrage on Monday after running an advertising about the forthcoming Diwali celebration. Fabindia tweeted a promotional image of their upcoming Diwali 2021 collection, featuring models dressed in the company's latest creations. To celebrate Diwali, Fabindia has created a collection called Jashn-e-Riwaaz, a collection that elegantly pays homage to Indian culture, the brand noted on its official social media accounts as they welcomed the festival of love and light. A heavy dose of trolling forced the shop to remove its original message. The post has since been deleted.

Diwali, a Hindu festival, is "defaced" by the brand's use of the word Jashn-e-Riwaaz. A lot of people blasted the company for using a Hindu festival to promote secularism and Islam. According to some online commentators, the tweet was culturally insensitive. Even if a mere mention of "Diwali" or "Deepavali" in the description would have sufficed for promotion, some insisted that the Hindu celebration should not be deconstructed and secularism infused into it. According to others, Hindu celebrations are just as important as Muslim and Christian ones, and combining them would be disrespectful to each.

Tejasvi Surya, a BJP leader, also voiced his displeasure with the clothing company's advertising campaign. He posted the following on Twitter: “When it comes to Deepavali, it's no Jash-e-Riwaaz. When models are shown without traditional Hindu garb, it's an obvious attempt at abrahamization, and it needs to be denounced. And companies like @FabindiaNews must bear the financial consequences of their recklessness."

In response to the promotion of its Diwali collection, Fabindia clothing brand has garnered criticism from social media users. The hashtag #BoycottFabIndia was used by social media users to express their displeasure with the brand's Diwali marketing name.

“As we approach the festival of lights, the Jashn-e-Riwaaz collection by Fabindia pays homage to Indian culture in a lovely way”, according to the now-deleted tweet from Fabindia. Many netizens criticised the post for being "culturally incorrect," while others argued that secularism should not be infused into a Hindu celebration. Many people said they would never buy anything else from Fabindia again after their experience.

A person said, "#BoycottFabIndia Diwali is jashn e Riwaaz? Let celebrate Jashn e drop sales. Jashn_E_Drop_Sale_FabIndia." Someone else expressed their thoughts in the following way: "It is the festival of light and love. Jash-E-Riwaaz? It's a festival celebrated around this time of year. It has never been or will ever be a secular celebration; it is and always will be a Hindu one. Hindus are unlikely to patronise a company that shows no regard for their cultural identity. #BoycottFabIndia."

The brand's collection was given an Urdu moniker, according to a tiny group of netizens. Another person chimed in, saying, "Boycotting Fabindia has become popular due to the poetic name they gave their Diwali collection, Jashn-e-Riwaaz, for their upcoming collection. This is ludicrous in the extreme. What impact does the fact that the collection's name is in Urdu have on your Diwali celebrations?"

Fabindia was forced to remove the tweet after numerous well-known individuals and politicians voiced their displeasure with the commercial. Some customers went so far as to vow they'll no longer shop at all from the company.