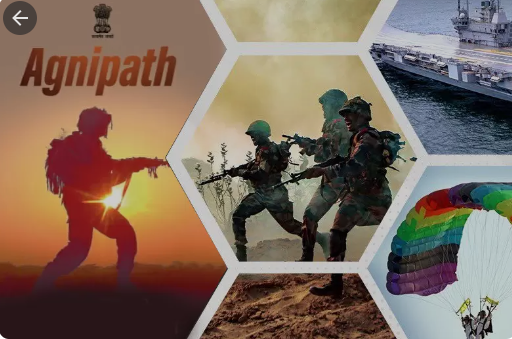 The government introduced a new scheme for recruitment into the Indian Armed Force, the Agneepath Scheme. Few days after the announcement, the youth took to the streets to protest against it, some of which turned violent.

As per the scheme, 46000 soldiers will be recruited every year in the armed forces from 17.5 to 21 years of age. Selected candidates, known as  Agniveers would be recruited for non-commissioned ranks (lower ranks) only with a salary of around 30000 per month. Additionally, when soldiers leave their post four years later, they would be given a lump sum of Rs 1.1million from the government’s SevaNidhi Scheme. Post these four years, they will be given a certificate and the money and then let go and look for other jobs. This will happen with at least 75% of the Agniveers, and the rest would be reenlisted in the regular cadre for full-time service. There is no job security and zero pension, which is the primary reason why the youth is out on the streets protesting against the Scheme, concerning their future. The protestors claim that the government is unable to generate actual jobs, and that is why they are coming up with temporary solutions and presenting to generate jobs.

The supporters of the Agniveer Scheme say that don’t look at it as a half-empty glass when it is half full, which means think of it as an opportunity and temporary employment rather than full-time unemployment with a good salary, excellent training facilities, developing of new skills, gaining new experience and a well-recognized certificate. They also claim that it would not be difficult for ex-Agniveers to get a new job because of the skills they have acquired, and their experience.

As the scheme is for non-commissioned officers, people are worried about what if they don’t get to learn important skills in these four years, which are indeed valid, and the Government has reacted accordingly. The states of Haryana, Uttar Pradesh, and Madya Pradesh have ensured to give priority to ex-Agniveers for jobs in Government. The age limit for the first batch of Agniveers has increased from 21 to 23. But, the people are still unaware of the marketable skill and evaluability of this four-year job. The Government listed some reasons for this scheme’s implementation; Firstly, to maintain age balance in the Military, which will be reduced since more than half of Army personnel would be young, lowering the average age of the Army, although they would be less experienced. Secondly, to reduce the pension load off the military. Instead of spending on pensions and salaries, they will use it to buy new weapons and invest in new technologies, which is prevalent in other countries too.

To counter this, people argue if the aim is to save money then why are not the pensions of politicians, MPS, and MLAs being cut, who are entitled to lifelong pensions. Politicians should be Agniveers too. They should be MPs, and MLAs for five years and then bid them adieu without any pensions. People are protesting primarily because they believe the government has to give them a job. This responsibility arises only in a country where govt. control the economy entirely. Their responsibility lies in enriching people with direct or indirect job opportunities.