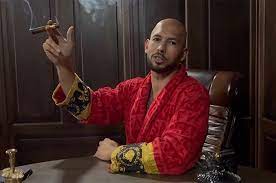 Controversial online social media influencer, Andrew Tate, has been detained in Romania as part of an alleged

The former American-British kickboxer rose to fame in 2016 when he was removed from the British TV show Big Brother over a video that appeared to show him attacking a woman. Despite numerous social media bans over very controversial topics, he gained popularity, particularly among young men, by promoting an ultra-masculine, ultra-luxurious lifestyle.

Mr. Tate, the self-proclaimed 'misogynist' influencer, who was detained alongside his brother Tristan, had his house raided in the capital, Bucharest. A police spokesperson has confirmed the arrests to the BBC.

Authorities suspect the pair, along with two Romanian men, of running an "organized crime group.

Mr. Tate has been arrested as part of a human trafficking and rape investigation after he allegedly kept six women under ‘house arrest 24/7 like prisoners’, it was alleged last night.

Officials close to the case said Tate asked his employees to shadow his victims’ every move, forcing them to take part in online pornographic videos.

Police alleged the victims were "recruited" by British citizens, who they said had misrepresented their intention to enter into a relationship with the victims - which it called "the loverboy method" and that they were later forced to perform in pornographic content under threat of violence, the statement alleged

Andrew Tate, 36, has yet to comment directly on the accusations.

Late Friday, a judge in Bucharest ordered all four parties to be held for an additional 30 days. A lawyer for Mr. Tate, Eugen Vidineac, said that he was “disappointed” in the outcome and that an appeal had been filed. An appeal’s judge will decide whether Mr. Tate will remain in prison for 30 days, Mr. Vidineac said, adding that a decision could come as soon as Monday.

Mr. Tate was again the center of attention this week after getting into a spat on Twitter with Greta Thunberg, a 19-year-old climate activist, bragging about his collection of exotic cars and their “enormous emissions” and asking for her email address.

Ms. Thunberg replied with an address ending in “@getalife.com.”

Speculation online centered on whether a distinctive pizza box featured in Mr. Tate’s tweets to Ms. Thunberg had helped lead the authorities to him. Still, Ramona Bolla, a spokeswoman for the Directorate for the Investigation of Organized Crime and Terrorism, told The New York Times on Friday that this was not the case.

Why Do So Many Young Men Idolise Andrew Tate?