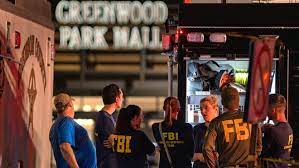 On Monday, an armed shopper fatally shot an active shooter at a shopping mall in Greenwood, Indianapolis.

The shooter, 20-year-old Jonathon Sapirman, shot five people, killing 3 of them before 22-year-old Elisjsha Dicken stopped him. Authorities believe that Sapirman assembled an AR-15-style rifle in the mall’s bathroom before he opened fire.

Dicken used a legally-registered handgun, according to Police Chief James Ison. Dicken engaged the gunman from a distance, motioning for shoppers to exit as he moved closer, Ison said. Sapirman attempted to retreat into the mall’s restroom when he was shot and fell to the ground.

Dicken was legally armed, but the Indiana mall prohibits people from carrying weapons on its property. The mall issued a statement Monday without mentioning its no-weapon policy, calling Dicken’s actions “heroic.” The Simon Property Group, the mall’s operator, did not respond to a request for comment on their gun policy.

As of July 1, Indiana’s gun laws allow anyone over 18 to carry a handgun in public, but private businesses and property owners can restrict people from bringing weapons on their property. Still, it is not generally against the law to ignore a “no firearms” sign.

Investigators of Monday’s shooting found a second rifle and more than 100 rounds of ammunition on Sapirman’s waistband. The second weapon, a Glock pistol, was purchased from a gun store in 2021, according to the police chief. Sapirman legally purchased both the AR-15 and Glock pistol.

Authorities have yet to uncover Sapirman’s motive. Sapirman’s relatives said that he was facing eviction from his apartment when he opened fire at the mall. They also shared that he resigned from his job less than a month prior, Ison said. However, the relatives did not indicate that Sapirman was violent or unstable.

Police are still looking for clear evidence of a motive. Investigators found a cellphone in the mall’s bathroom believed to be Sapirman’s and a laptop in his apartment. The FBI will analyze both devices.

In the meantime, Greenwood’s community grieves for the mass shooting victims. Officers identified the slain victims as a married Indianapolis couple and a man, also of Indianapolis. In addition, a woman and a 12-year-old girl were wounded in the attack and received medical treatment.