As per Islamic Faith, wearing of Hijab is not an essential practice: Karnataka High Court 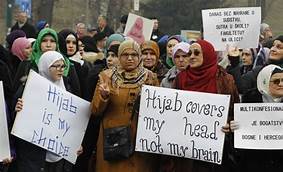 The students who had challenged the decision of ban on wearing Hijab in the class received a huge setback when the Karnataka High Court reaffirmed the earlier decision of the state government and ruled that wearing Hijab is not an essential practice as per the Islamic Faith.

While stating the decision, the three-judge bench headed by Chief Justice of the Karnataka High Court Ritu Raj Awasthi affirmed that prescription of school uniform is lawful and it does not violate the rights enshrined in the Constitution, namely Right to Speech and Right to Freedom of Privacy.

“Government’s decision was not illegal”:

On February 25th, the three-judge bench also comprising of Justice J.M Khazi and Justice Krishna. S. Dixit reserved its verdict after 11 days of the hearing. It was to be pronounced after the completion of a hearing on petitions filed by nine Muslim girl students. These students are studying in government pre-university colleges in the Udupi district of Karnataka. The students sought a declaration from the court that wearing ‘Hijab’ inside classrooms or in educational institutions is their fundamental right to Freedom of Religion. And that wearing the headscarf is an essential practice under Islam and no educational institution can stop them from wearing it.

The High Court of Karnataka had banned religious clothes such as hijab and saffron scarves (bhagwa gamcha) temporarily last month after a massive face-off between different sections of students. This decision of the court was released after on February 5th, the Karnataka government banned “clothes that were against law and order”. This applied to educational institutions that have a certain dress code.

The controversy over Hijab emerged late last year when certain students were barred to enter the classroom while wearing Hijab in Udupi, on the grounds that it violated the school’s code of conduct. Reaffirming the State Government’s decision which was released on the 5th of February, the Karnataka High Court stated that the policy on prescribing uniform by the government is not illegal and therefore, no case is made out to take action against the authorities of the alleged educational institutions and their authorities in Udupi.

Ahead of the order, the State Government is anticipating protests and thus, had banned large gatherings for a week in Bengaluru and Mangalore in order “to maintain public peace and order.” Schools and colleges in Udupi and the Dakshina Kannada districts will remain closed for the day of the verdict.