At Least Four Killed in Mass Shooting in Tulsa, Oklahoma 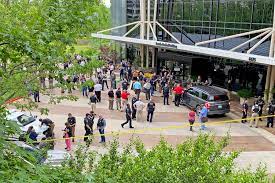 At least four people were killed in a mass shooting in Saint Francis Hospital in Tulsa, Oklahoma on Tuesday. Tulsa police Captain Richard Meulenberg called the scene “madness”, as crowds of people tried to leave the building all at once.

The motives of the shooter are still under investigation; however the shooter, identified as Michael Louis, was heard complaining about back pain for an extended period of time by his family. Louis received back surgery at Saint Francis by an orthopedic surgeon named Dr. Preston Phillips a month ago, and Phillips was one of the four people who were shot and killed. According to a story published by the Daily Beast, Louis’ niece, who was contacted by the police following the shooting, said that she and her family are “distraught'' by the incident and affirmed that they do not condone or associate with this kind of violence. His niece stated that unattended back pain is no excuse for the killing of innocent people.

Although it is still speculation, it is assumed that Louis opened fire as revenge for his back not decreasing in pain level after the surgery. Along with Dr. Phillips, the three other victims of the shooting have been identified as Dr. Stephanie Husen, William Love, and Amanda Glenn. It is believed Louis turned the gun on himself after opening fire and died from a self-inflicted gunshot that same day.

It has been nine days since the horrific events that occurred at Robb Elementary school in Uvalde, Texas, that left 19 children and two teachers dead. Since then, there have been 17 mass shootings in the US, leaving at least 13 others dead and more than 70 injured. Once again in the US, gun control has become the main issue being discussed in Congress and in the media. The sparse political divide between supporters and opposers of guns has created social tension across the country, as both have very different ideas on how to solve this pressing issue.

As the trend of mass gun violence continues specifically only in the United States, citizens look to policymakers in hopes that new gun control legislation can make a difference in decreasing mass shootings across the country.