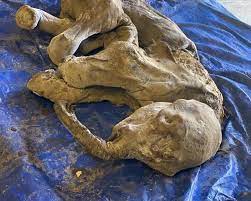 Last month during an excavation in the Klondike gold fields of the Yukon, mining employee Travis Mudry found the frozen body of a baby mammoth behind a frozen wall of earth. Using a machine called a ripping attachment, he was tearing through layers of permafrost that were untouched for thousands of years, and that’s when he revealed the body of the mammoth.

After calling over his supervisor Brian McCaughan, they analyzed the body. It was a dark gray-brown color, with a skinny, wrinkly trunk and stubby legs. Its eye sockets were also very deep and indented, and it was in the fetal position. After much debate, they finally officially identified it as a baby mammoth.

“I thought it was a baby buffalo in the beginning, and then I got out, and I was inspecting it, and it had a trunk, so I had no words.” said Mudry in an interview according to the New York Times. According to Mudry, the mammoth had its hide and hair fully preserved when it was removed. Expert geologists at the University of Calgary estimate that the mammoth was female, and that it has been preserved in permafrost for over 30,000 years. It was just over one month old when it died and fell in the mud.

The land in which the baby mammoth was found was the ancestral land of the tribe Trʼondëk Hwëchʼ, whose elders named the mammoth Nun cho ga, or “big baby animal”. This area of the Yukon is known for various findings of fossils and bones, but this finding is historically rare as finding a mammoth preserved this well is unheard of. It is believed that this mammoth is the most complete mammoth discovered in recorded history in North America.

“It’s like we got rewarded by Mother Earth when you pull something like this out of the ground,” says Brian McCaughan. This wooly mammoth’s family and ancestors most likely roamed with wild horses and cave lions, and while it is a shame its life was cut short, the discovery of its body is a fantastic achievement for paleontologists and anthropologists around the world.

‘Humans Could Shrink Due to Climate Change’ Palaeontologist Claim