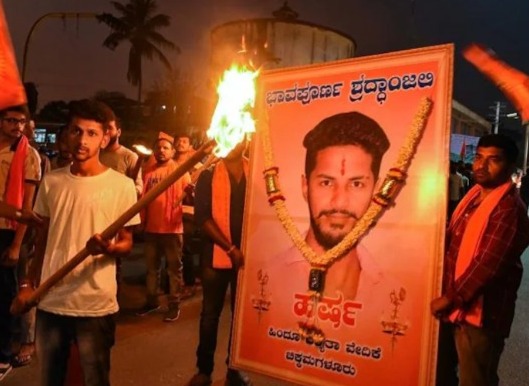 Ashwini, the sister of the Bajrang Dal member whose death has sparked a massive protest in Karnataka since Sunday, told a reporter yesterday that her “brothers,” mostly Bajrang Dal members, will not “let the matter go so lightly” and will fight for “justice” for her. Ashwini also told media reporters that she was always pleased with his activities and that she never discouraged him from it. “I have faith in the system of justice. My brothers will see to it that I receive justice,” she said.

Three individuals have been jailed, and around 12 people have been interrogated in connection with the murder of Harsha, a 25-year-old active member of the right-wing Bajrang Dal.

According to reports, Harsha, who was attacked on Sunday night by a gang that arrived in a vehicle, was being monitored and had received threatening calls on his mobile.

When asked if Harsha got threatening calls and if he communicated any of them with the family, Ashwini replied, “He hasn't ever discussed anything with us. He had a habit. He used to go to the office and then return home after office work. Our people have been getting older. He used to never share or discuss any topic with us.”

When asked if she ever told her brother not to participate in Bajrang Dal rallies or events, she replied, “I was always grateful that he was a very active and very effective participant. I have always been there for him. But we never imagined he'd end his life.”

The violence took place in Karnataka's Shivamogga on Monday at Harsha's cremation, and his death has been connected by many to the state's continuing conflict over the hijab issue in Karnataka state.

In the midst of the scenario, approximately 1000 police officers, the Special Task Force, and the local police department marched into the area that witnessed violence.

The state government has criticized the authorities for allowing his funeral procession, which gathered 5,000 people and resulted in fire, stone whacking, and police lathi charges on locals.

Though the Karnataka government denied any connection to the hijab controversy yesterday, a minister today stated that the killing will be examined from “all aspects, including the hijab dispute.”

“Organizations involved in the hijab controversy are indeed being investigated. Their participation is also being investigated. Legal action will be taken against individuals who threw stones yesterday,” Karnataka Home Minister Araga Jnanendra added.