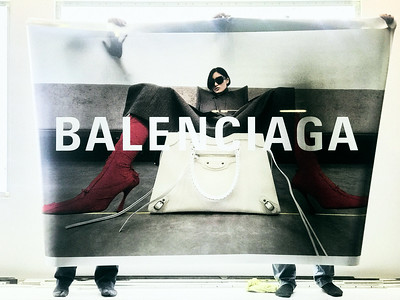 Balenciaga was forced to remove their Spring 2023 campaign as it showed children holding teddy bears with bondage gear on. The apparent underlying message surrounding child pornography and abuse outraged the media and public, and has led to the formation of other theories about the brand’s intentions.

On November 21, 2022, Balenciaga posted photographs from their most recent campaign demonstrating children as part of their “Toy Stories” collection where children pose next to their favorite toys. Two separate photographs of girls no older than five years old were seen holding what at first appeared to be regular teddy bears, but were actually bear bags dressed in BDSM clothing. Within another photograph of a young boy amongst the bondage bears, Twitter users were able to dissect the image and find other hidden messages that promoted child pornography. In the corner of one of the photographs, there was a document from a US Supreme Court opinion in United States v. Williams which upheld part of a federal child pornography law.

Another TikTok user analysed the photograph and found specific dates written on the wall next to child-like scribbles. The dates were significant because each one had an incident happen that was related to child abuse. This furthered speculation that Balenciaga intentionally placed these props and messages for the shoot, but the brand continues to avoid explicit admission of wrongdoing.

Balenciaga released a statement through an Instagram story two days after the ads were released. They first apologized for the ads and made it clear that they do not condone any child abuse or child pornography.

Balenciaga went on to explain that they are permanently removing the campaign and will be “taking legal action against the parties responsible for creating the set and including unapproved items,” which appears to be an attempt to shift the blame elsewhere.

Not only did the high-fashion brand get called out for the horrific photographs, but so did the photographer himself. Gabriele Galimberti made a statement on his Instagram page in which he explained that he had no say in the models or props of the photoshoot.

He said: “As a photographer, I was only and solely requested to lit the given scene, and take the shots according to my signature style… I have no connection with the photo where a Supreme Court document appears. That one was taken in another set by other people and was falsely associated with my photos.”

Indeed, those involved with Balenciaga’s campaign appear to be continually attempting to avoid blame or shift it elsewhere. However, what has surprised and confused many is the fact that no one involved in the campaign stopped to think twice about the concept - and put an end to it - before it was released to the public to face scrutiny.