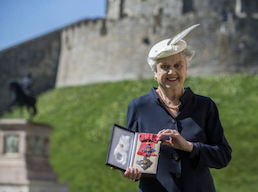 When people hear the name Angela Lansbury, they mostly think about the hit American murder-solving book writer Jessica Fletcher. It is, after all, one of Britain’s favourite exports of American television and the role which brought Angela the most recognition and freedom to help others in the industry.

In fact, American author Tess Sharpe remarked on how Angela would deliberately make sure it ‘-became a practice to hire guest actors of the golden age, that had aged out of the game, because it allowed them to earn the union points they needed for insurance, pensions, etcetera. An actual, true angel.”

Born in 1925 into a middle-class London family, young Angela lived in Regent’s park with her father, Edgar Lansbury, a politician that was one of two Communist Mayors in England’s history, Honorary Treasurer of the East London Federation of Suffragettes and eventually a supporting politician for Labour, and Irish film actress Moyna Macgill, who was originally known as Charlotte Lilian McIldowie, and was opposite Basil Rathbone and played Desdemona, in a London production of Othello, for which she was critically acclaimed.

Unfortunately for young Angela, her father, who she loved dearly, died of Stomach cancer just fifteen years later, and she threw herself into work to cope with her grief.

Her mother remarried a Scottish Colonel, Leckie Forbes, and as a result, she moved to Hampstead, where she studied and found love in the cinema visiting regularly, as many young people her age did.

Her love of the cinema’s silver screen put her interest towards learning the piano, and eventually, in 1940, she studied dancing at Webber Douglas School of Singing and Dramatic Art, which closed in 2006.

Then, fearing the second World War, Moyna took Angela and her brothers, Bruce and Edgar Lansbury, to America, which made them the last boatload of British evacuees to travel there before the war; travelling by boat was dangerous after that.

The family moved to New York, except for her half-sister, Isolde Denham, who already grew up and married actor Peter Ustinov. She was yet another film-loving actress in the family, with her two brothers being producers and actors, and eventually remarried a writer, Derek Dempster.

Unfortunately, her half-sister, Angela and one brother, Edgar, outlived her, as she died of Motor Neurone disease in 1987.

The rest of her family moved around shortly after going to New York, as Moyna toured theatrically around America and into Canada, where Lansbury secured a job singing at the Samovar Restuarant and Nightclub in around 1940, by falsely convincing them she was seventeen, almost eighteen when she had only been sixteen at the time.

Monya then wished to re-discover her career as an actress, so the family moved again to the Hollywood Hills, to a bungalow in Laurel Canyon, which was the first home they’d owned.

Angela then worked at a department store called the Bullocks-Wiltshire Department store, a popular spot for its tearooms and shopping since the 1920’s while her mother was trying to get back into jobbing as a former actress to support her family. Though the wages at the time were only about twenty-eight dollars or twenty-five pounds and five pence, it was more stable for helping the family than her mother’s career and enabled her to still meet people in the industry through her mother, which was a great connection that gave her a valued connection to the man who would give her first on-screen role.

Screenplay writer John Van Druten, a man from England as she was, had just finished a script for Gaslight, in which young Angela starred as the Cockney housemaid, Nancy Oliver, in the household of Gregory Anton, who captures young Opera trainee Paula Alquist’s heart.

The 1940’s film is also where the term Gaslighting comes from, in psychology, named for both the title and the plot, given that Anton schemes a plan to drive his wife mentally ill and receive the money that her deceased Aunt left her, hoping to aid in her opera career, being a singer herself.

In 1945, Her portrayal of Nancy Oliver earned her an Oscar nomination for the best supporting actress, and Angela gained a seven-year contract with the film studio Metro-Goldwyn-Mayer, which earned her five hundred dollars per week.

Now, about four-hundred, forty-seven pounds and thirty-nine pence in today’s money, it helped her family even more as her mother’s career never did pick up in the same way- since she took a break to marry and have children- and made Lansbury famous enough to gain recognition for future roles.

When she grew unsatisfied at the end of the contract, she used her recognition now as a freelance actress to find other jobs, and those roles included Broadway performances like Mame, based on the book by Jerome Lawrence, and Robert E. Lee.

According to the BBC’s Obituary for her, this included now-well-known films like The Picture of Dorian Gray - securing her a Golden Globe Award and a second Oscar nomination - and then State of the Union, with Spencer Tracy and Katharine Hepburn. She even starred alongside Bruce Forsyth and David Tomlinson in Bedknobs and Broomsticks and starring in her famed Murder, She Wrote series for twelve years starting in 1984, and the nine seasons of the hit show made her very wealthy, with another BBC article saying that she was ‘also the show's executive producer, one of the country's wealthiest women, with a fortune estimated at nearly one hundred million dollars.’

Known as the voice of Mrs Potts in another Disney Classic, Beauty and the Beast, in 1991, this secured her popularity and love with many families and young children, as well as the love of all her Golden Age of Cinema co-stars.

There was a large break in her career due to her family home being ravaged by fire and relocating, plus her second husband, Actor, Peter Shaw, had been suffering from ill health. He later died in 2003, after fifty years of marriage, which was a terrible shock to Angela, who struggled immensely with deaths in the family as she had always done, even when her father had died.

Her first prominent film role in years after the failure of her second husband’s health was that of Aunt Adelaide in the fantasy film Nanny McPhee, and then again in 2018, when she played another part alongside another well-loved nanny, with the original Mary Poppins actor,  Dick Van Dyke in Mary Poppins Returns.

Her eight-decade-spanning career was an impressive one, and leaving behind her legacy for her fans and family, three children and her brother, producer Edgar Lansbury (Named after their father), as well as several grandchildren and great-grandchildren.

The life of the late filmmaker Jean-Luc Goddard, through his life and influence on films