Benin Strives to Get Back Stolen Artworks from France 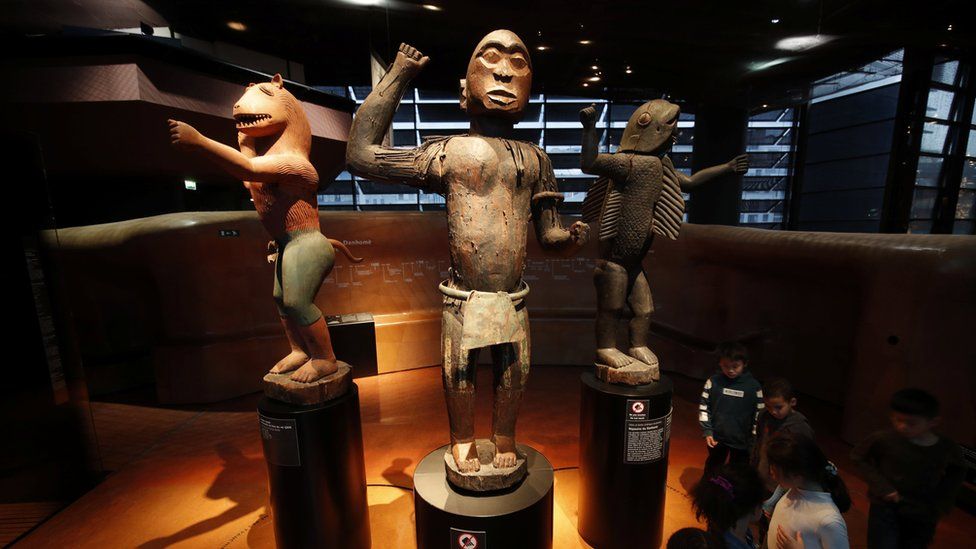 Benin has recently received the official visit of the French President, Emmanuel Macron, as France is lately trying to refresh relations with its ex-colonies.

One hot issue is the military aid that the country expects from France to contain the Jihadist threat coming from the north, particularly now that France is withdrawing its troops from Mali.

Another important issue, though, vital for Benin as well as for many African countries that share the same colonial past, is the return of many artworks stolen during the French occupation.

In November 2021, the French Quai Branly museum gave back 26 items to Benin, such as scepters, statues, and the doors of Dahomey’s royal palace. These artworks were looted by French soldiers in 1892.

The restitution was made possible thanks to a law enabled in 2020 that introduced exceptions to the inalienability principle that belong to public collections. Since it has been declared that the presence of these objects in France was the result of looting, it has been acknowledged that restitution to Benin should be made.

Following this law, the ministers of culture of both France and Benin met to confirm the formal transfer. This was the achievement of a process commenced by Emmanuel Macron in 2017 as he recognized the need to restore justice.

Benin’s president, Patrice Talon, is hoping that this will be the first of a series of goodwill gestures to get back more artwork. After the restitution, he declared that "I am happy but there are still many objects to be recovered, like those of the amazon women who lost their lives fighting against the French."

The president, however, is not demanding the restitution of all artworks currently in the possession of several museums worldwide. Accordingly, as reported by France 24, he said that it is important that Benin’s art can be explored and enjoyed in several parts of the world: "We're not going to ask for everything to be returned. Beninese works must remain in museums around the world so that the world sees the greatness of Benin. "

The 2021’s restitution spurred also other countries. Similar actions have been undertaken by Berlin through an agreement with Nigeria. According to this, at least 1,100 bronzes claimed by the country for many years will be returned as of 2023.

Belgium also pledged to restitute several items to the Democratic Republic of Congo and France to Madagascar and Senegal, besides Benin.

For Nigeria, as well as for Benin, this is one of several attempts to recover its looted treasures scattered in several European museums. Great Britain alone possesses thousands of sculptures after the British pillage of Benin City in 1897.

The reason for the lack of uniformity in the restitution issue among the former colonial countries is that each of them considers this possibility on a one-to-one basis. This entails painstaking, and often difficult-to-achieve work in determining where these artworks were acquired from.

Despite these expressions of goodwill, the struggle for Africa is still long.

As reported by the Foreign Policy, the number of African artworks in European museums is staggering. For instance, Belgium’s Royal Museum for Central Africa has 180,000 objects; Germany’s Ethnological Museum has 75,000; France’s Quai Branly Museum has almost 70,000; the British Museum has 73,000, and the Netherlands’ National Museum of World Cultures has 66,000.

The restitution of artworks is not just a matter of principle and justice. It is a matter of the cultural identity and dignity of each independent state. Hopefully, those European countries that currently enjoy African artworks in their museums will decide soon to follow a more reasonable path.