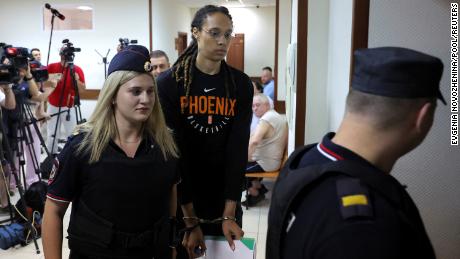 Back in February of this year, WNBA player Brittney Griner was detained at a Moscow airport for the alleged possession of cannabis derived oils for a vape. She has been held in Russia since then. According to CNN, Griner testified that officers only explained a fraction of her rights to her and that she was not informed if she had access to a lawyer after being detained. The officers also had her sign documents with very little explanation of what they were. She also revealed that she had to use a translation app on her phone to communicate with customs officers. She could face up to 10 years in prison if convicted. Griner has already pleaded guilty, although she stated she had no criminal intent.

In her testimony, she also said, “I didn't have any intent to use or keep in my possession any substance that is prohibited in Russia… With them being accidentally in my bags, I take responsibility, but I did not intend to smuggle or plan to smuggle anything into Russia.” Griner also claimed that she utilized cannabis to ease pain from past injuries. However, a Russian spokesperson stated that the legalization of cannabis for medicinal and recreational purposes in the US had no effect in Russia.

On July 27, it was reported that the Biden administration offered the exchange of Russian arms trafficker Viktor Bout for Brittney Griner and fellow American Paul Whelan. Bout is currently serving a 25 year prison sentence in the US. In 2008, Bout was arrested for working for the Revolutionary Armed Forces of Columbia. A group deemed as terrorists. During his trial, it was revealed that Bout was able to provide the group with about $20 million worth of weapons. The so-called “Merchant of Death” was convicted in 2011 after aiding in terrorist activity and conspiring to kill American citizens.

There have been mixed reactions amongst people on social media. Some sympathize with Griner, stating that she is merely a political prisoner being used as a power play in Russia's political game. Others believe that the supposed swap is not ideal. Some claiming that the WNBA star is an “America hater” and that she does not deserve special treatment. One person tweeted, “Biden wants to trade a convicted Russian arms dealer who is serving 25 years in jail for that incredibly serious crime… for America hating Brittney Griner.”

Sports Illustrated reported that the trial is expected to end Friday next week. It is there that she will receive her sentencing at the verdict.

The Departure of the first cargo vessel carrying grain from the Odessa sea port: a hope for a solution?

US basketball star Brittney Griner was charged with illegal possession and sentenced to nine years in prison.