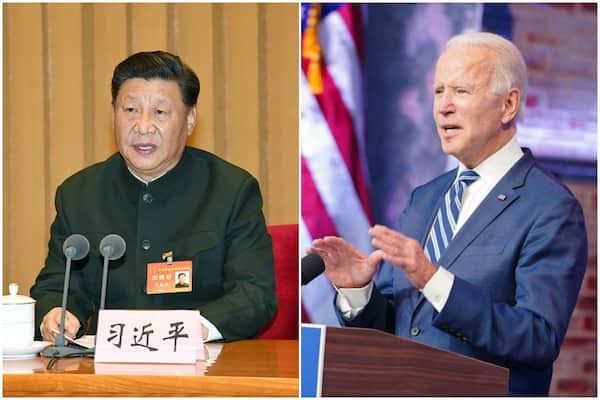 US President Joe Biden dialled The White House hotline to his Chinese counterpart Xi Jinping for the first time in 7 months regarding China's growing contiguity with the Taliban. After Biden made an end to the longest war on terror in American history, the South Asian nation of Afghanistan has become one of the most fragile and capricious countries in today’s contemporary world as the Taliban made immediate progress to take full control of the country, ousting the democratically elected government headed by Ashraf Ghani who has now fled the country and found refuge in UAE.

With the country slipping into mayhem soon after the US departure, Afghanistan’s immediate neighbours namely China and Pakistan are running hither and thither to make a substantial ascendancy in the country as the former and latter nations were the first to formally recognize the Taliban’s superintendence over Afghanistan.

In a press junket, The White House Press secretary Jen Psaki iterated that “President Biden recently got in touch with Chinese President Xi Jinping and discussed in a candid chat about the turmoil in Afghanistan and the influence China and Pakistan are trying to create" Similarly, state-controlled Chinese news channel CCTV highlighted Xi's dialogue with Biden over Afghanistan and his clear dismay for China's relation with the Taliban

China recently announced an aid of $30 million to Afghanistan as the country is going through a never before seen inflation and price rise of essential commodities and also promised to supply more than 3 million covid vaccines to the country. Similarly, on 4th September, Pakistan's ISI chief Lieutenant General Faiz Hameed made an unannounced hushed-up trip to Afghanistan and met the Taliban supremo and just two days later, the interim Taliban led government portfolios were announced which had scores of terror connected individuals with bounties on their head including the newly elected interim Prime Minister Mullah Hasan Akhund who has a $10 million bounty prize on his head by the US government.

CNN‘s global politics ‘pundit' and journalist Fareed Zakaria has said that “it is no secret the Taliban made tremendous progress so easily and so quickly only because they had large support from China and Pakistan. On one hand, China will exploit its influence to even the scores with its neighbouring enemies like India with whom they’ve been locked in horns and scuffling since last year in the Ladakh region. On the other hand, Pakistan has always maintained good relations with the Taliban. The extremist Islamic terror outfits operating in Pakistan are extremely sympathetic for the Taliban and now, they have found a breeding ground where various terrorist organizations like the Lashkar-a-Toiba will be hand in glove with the Taliban.”

According to reports made public by the CIA, China is looking to get control of the Bagram airbase in Afghanistan which is a huge strategic vantage point in the country and has also made the Taliban agree to share intelligence with them for collective growth and security. Pakistan has also got more power with the emergence of the Taliban as state-sponsored terrorist groups which operates for the liberation of Kashmir will get more sophisticated added support and training from the Taliban.

During Biden's call with Xi, the POTUS also emphasized India's interests and security as the cooperation between the world’s largest and oldest democracies will be a crucial factor in this situation according to professor Lawrence Hapko of Georgetown University. The point became more evident when the chief of CIA William Burns flew down to India earlier this week to meet with the National Security Advisor of India Ajit Doval regarding the fallout in Afghanistan. The CIA head also met with Pakistan’s military chief on Thursday but according to reports, the meeting with his Indian parallel was more discreet and serious.

Biden's phone call with Xi gave a signal to the global world that the American government isn’t letting things go with the flow or isn’t concerned about the security of its strategic allies. In a recent press release by The White House, the Biden administration has strongly stated that the American government has not and will not recognize a government headed by a terrorist organization but will be diplomatically involved to secure the rights and security of the citizens and its allies. Similarly, the EU also came out with a press release that it will not recognize the new Afghanistan political regime but will closely monitor the safety, security and human rights of the country’s citizens.

As the US commemorates the 20th anniversary of the harrowing 9/11 attacks, the country is engaging from all diplomatic angles possible to curb the growing gravitas of the Taliban with the help of China and Pakistan. The Taliban has already banned sports for women, installed partitions in co-ed institutions and completely stifled the press and experts say there’s more to come.