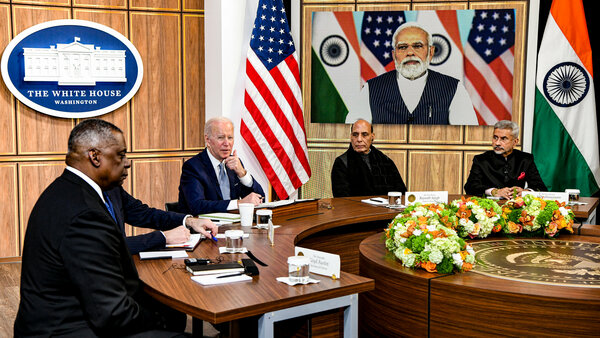 The United States President Joe Biden and India’s Prime Minister Narendra Modi held a virtual meeting on April 11 as the U.S. is seeking more support from India on its response to Russia’s invasion of Ukraine, on which India has taken a neutral stance.

The Indian government has tried to maintain a balanced approach to the conflict and has avoided criticizing Russia while encouraging negotiations between the two countries and sending Ukraine humanitarian assistance. India's neutrality has raised concerns of the United States, whereas the Russian side has praised the country for judging “the situation in its entirety, not just in a one-sided way.”

India is the only one of the four Quad members that have not imposed sanctions on Russia, unlike the other Quad nations which are Australia, Japan and the United States. The country also continues to buy oil from Russia and has bought at least 13 million barrels of Russian crude oil since the invasion of Ukraine in late February.

Having banned all Russian energy contracts, the U.S. seeks a similar commitment saying that India’s oil imports from Russia correspond only to one to two per cent of the country’s total oil needs. However, India is not the only country that has continued to buy Russian oil as many European countries such as Germany also continue to do so.

Although the United States wants India to avoid such purchases, Biden appears to have refrained from making a clear ask of Modi on India’s energy imports from Russia during the meeting. He, however, conveyed very clearly that it was not in India's interest to accelerate or increase oil imports from Russia, said the White House Press Secretary Jen Psaki, who described the call as “constructive” and “productive.” Psaki did not disclose whether India had made any commitments regarding energy imports but said that the United States was ready to help India diversify its energy sources.