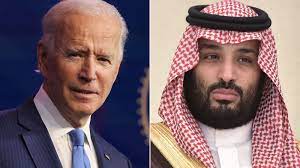 President Biden will meet with Crown Prince Mohammed Bin Salman during his visit to Saudi Arabia in July. Bin Salman is the de-facto leader of the country who built his reputation as a young reformer, however, his standing has quickly soured within the United States.

President Biden had pledged to make Saudi Arabia a “pariah” state during his campaign following the murder of American citizen and journalist Jamal Khashoggi. A recording obtained by the New York Times strongly linked the crown prince to the murder. Khashoggi was a prominent critic of the Saudi regime. Khashoggi was murdered in the Saudi consulate in Turkey in 2018.

Saudi Arabia is a massive exporter of petroleum. As gas prices soar in the United States, president Biden will urge the Saudi prince to increase oil production in hopes of offsetting some of the shocks to the market brought about by the Russian invasion of Ukraine. President Biden has denied that oil production is the top priority of this meeting, however, he has admitted it is a factor.

Biden will visit Israel on the same tour of the Middle East. A major priority during his trip will be to link the two visits and attempt to improve relations between Saudi Arabia and Israel.

Critics of President Biden’s trip include groups that advocate for 9/11 victims' families. Recently released footage showed 9/11 hijackers with alleged Saudi intelligence operatives. 15 of 19 hijackers involved in 9/11 were Saudi citizens. The Saudi state has consistently denied any involvement in 9/11.

Defenders of Biden’s meeting with the Saudi crown prince have praised Biden’s policy of realism. Writing in the Atlantic, Andrew Exum, said “The president is sacrificing his values in the interests of something we haven’t seen much of in the past two decades: realism.” Proponents of realism argue that states should act in their own interests, even when those interests come into conflict with human rights.

President Biden’s trip will be an opportunity to reset the American relationship with Saudi Arabia. However, it will likely come with a cost from critics concerned with Bin Salman’s record on human rights.