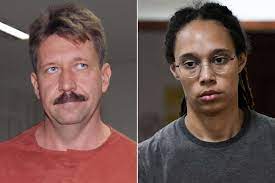 Brittney Griner, WNBA basketball star, has returned home after nearly 10 months of being detained in Russia.

Griner was detained by Russian authorities after being accused of illegally carrying hashish oil in her luggage at the Sheremetyevo airport on February 17 of this year.

The Biden administration had been negotiating a “prisoner swap” with Russian officials to bring the basketball player home. U.S. officials agreed to release the Russian Arms dealer and United States terrorist Viktor Bout In exchange for Griner.

In 2011, Bout was convicted of illegal arms trafficking, conspiring to kill Americans, and aiding a terrorist organization.

Many Americans are wondering why Paul Whelan, former U.S. Marine, was left out of the swap when Griner was safely returned to the US.

Former President, Donald Trump, wrote: “What kind of deal is it to swap Brittney Griner, a basketball player who openly hates our Country, for a man known as “The Merchant of Death”, who is one of the biggest arms dealers anywhere in the World, and responsible for tens of thousands of deaths and horrific injuries. Why wasn't former Marine Paul Whelan included in this totally one-sided transaction? He would have been let out for the asking. What a “stupid” and unpatriotic embarrassment for the USA!!!”

Whelan’s brother, David Whelan, made a statement condoning the President on his decision to bring Griner home. He stated: “The Biden Administration made the right decision to bring Ms. Griner home, and to make the deal that was possible, rather than waiting for one that wasn't going to happen.”

Griner’s wife, Cherelle Griner, also said that she and Brittney will remain committed to the work of getting every American home, including Paul.

Many Americans are worried that Biden made the wrong choice in returning a convicted terrorist back to Russia. When asked about Russia's interest in Bout’s return, Bill Burns, CIA Director said: “That's a good question because Bout’s a creep.”.

In the 1990s, Bout emerged as a kingpin in the illegal arms trade. He is credited with supplying firearms to some of the world’s deadliest conflicts, especially in Africa. Nicknamed the “Merchant of Death”, Bout sold up to $20 million dollars worth of firearms that assisted in the loss of countless lives and even.

The “Merchant of Death” is seen as a savvy businessman in Russia who was wrongly imprisoned. Shira A. Scheindlin, the former federal judge, who originally sentenced Bout in 2011, said: “He’s done enough time for what he did in this case.”

Antony Blinken, the United States Secretary of the State, said: “We make no apologies for making tough decisions if it results in the return of a wrongfully detained American.”