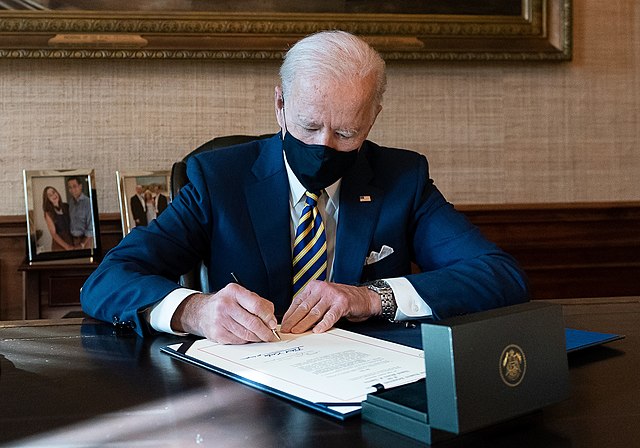 On Tuesday 16 August, US president Joe Biden signed the Inflation Reduction Act of 2022 into law. The $369bn bill will be poured into clean energy sources and aid the transition away from America’s reliance on fossil fuels.

During the ceremony on Tuesday, President Joe Biden described the bill as “the most significant legislation in history to tackle the climate crisis”. The Rhodium Group stated in a July report that this was the country’s last opportunity to halve greenhouse gas emissions by 2030 and reach net-zero by 2050.

Scientists say the decision signals to other nations that America, one of the biggest greenhouse gas emitters, is on board to address climate change. “This deal is coming not a moment too soon” stated Tiernan Sittenfeld, senior vice president of government affairs in an interview with Politico.

What will the Inflation Reduction Act mean for Americans?

The legislation aims to move away from the highly volatile fossil fuel prices and bring energy bill relief to American households. Each US household could save an estimated $1800 per year if they installed electric heat pumps for hot water and air conditioning, replaced a gasoline-powered car with an electric vehicle, and installed solar panels.

Many of the changes proposed will not be accomplished for at least two more years, leaving questions on how these policies will work. The tax credit for electric vehicles comes with strict requirements on how the car is made. Industry executives said it would take car companies five years to change their supply chains enough for their products to qualify for tax credits.

“It’s going to be a lot harder for cars to qualify and for consumers to qualify for a federal tax credit for the purchase of an E.V.”, said John Bozzella, president of the Alliance for Automotive Innovation.

A record $60 billion will go to environmental justice communities, including reducing pollution and making clean energy more accessible by offering tax credits for green investments. The US invested $152bn less than China in green technology as they put $380 billion into clean energy in 2021, more than any other country.

“This bill will really turbocharge that transition to clean energy – it will transform markets where already solar PV, wind, and batteries are in many cases cheaper than incumbent fossil fuels”, said Anand Gopal, Executive Director of Policy at Energy Innovation.

A climate scientist who led an independent analysis of the package says the bill will reduce future global warming by "not a lot, but not insignificantly either". The bill is projected to lower US emissions by up to 44% by 2030, compared to 35% under the current policy, according to an analysis by the Rhodium Group.

The global temperature will rise above the 1.5 °C mark even if all the countries fulfil their climate pledges, says Roxy Matthew Koll, a climate scientist at the Indian Institute of Tropical Meteorology in Pune. Many nations in the Global South face the impacts of global warming daily yet emit only a fraction of the world's greenhouse gases.

Mohamed Adow, a climate policy expert at Power Shift Africa, says that as one of the largest greenhouse gas emitters, the United States, should deliver the climate finance pledged in the Paris Agreement to poor countries. High-income countries failed to fulfil promises to donate $100 billion a year to poor countries until 2025. “That’s what we need to see for a real jump in progress on the global stage,” he says.

A Pew Research Center poll found that 58% of voters believe the federal government is doing too little to mitigate the effects of climate change compared with only 18% who believe the government is going too far.

The bill passed because there were 50 Democrats in the Senate and the Democratic Vice President had the deciding vote.

Senator Bernie Sanders of Vermont says, “this legislation goes nowhere near far enough for working families, but it does begin to address the existential crisis of climate change. It’s an important step forward and I was happy to support it”.