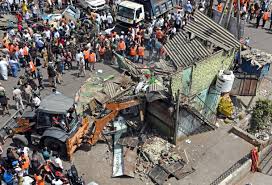 Communal violence occurred in Jahangirpuri, a region in northwest Delhi, on April 16 during a Hanuman Jayanti cavalcade, which led to an increase in the security in that area since then. On Wednesday, Delhi BJP leaders met union home minister, Amit Shah, to talk about the ongoing situation in Delhi.

Anti-encroachment drive was stopped after Supreme Court ordered the discontinuation of the demolition drive. On Wednesday, there was the deployment of about 1,250 CRPF jawans to be a watchdog in the city to control the situation.

According to the Delhi police, it all started when people were celebrating the occasion of Hanuman Jayanti in the streets of Jahangirpuri on Saturday, where a few people began stone-pelting, and several vehicles were set on fire, leaving eight people injured.

The destruction in the city surfaced when Delhi BJP chief Adesh Gupta wrote a letter to NDMC mayor Raja Iqbal Singh requesting that the unlawfully constructed buildings and stores owned by the rioters of that tragedy be demolished. Bulldozers were dispatched, and several businesses were demolished.

According to a local shopkeeper, “We have incurred a loss of around 2-3 Lacs, as our shops were torn off inside the mosque premises”, he stated to The Indian Express.

Delhi Police have arrested 23 people who are majorly from the Muslim community. Mohammad Ansar and a few more have been identified as the key conspirator of the violence which broke out during the Hanuman Jayanti celebration on April 16.

The Aam Adami Party and Bhartiya Janta Party have started accusing each other of Ansar being a member of their party, thereby supporting the violent clash.

Manish Sisodia, Deputy Chief Minister of Delhi, slammed the BJP on Wednesday after a demolition campaign in Jahangirpuri, calling it a "drama" and accusing the party of being accountable for the invasion of the region.

According to Congressman Rahul Gandhi, this is a deconstruction of the constitutional principles of India. It is state-sanctioned discrimination against the poor and minorities. Instead, the BJP must tear down the enmity in their hearts.