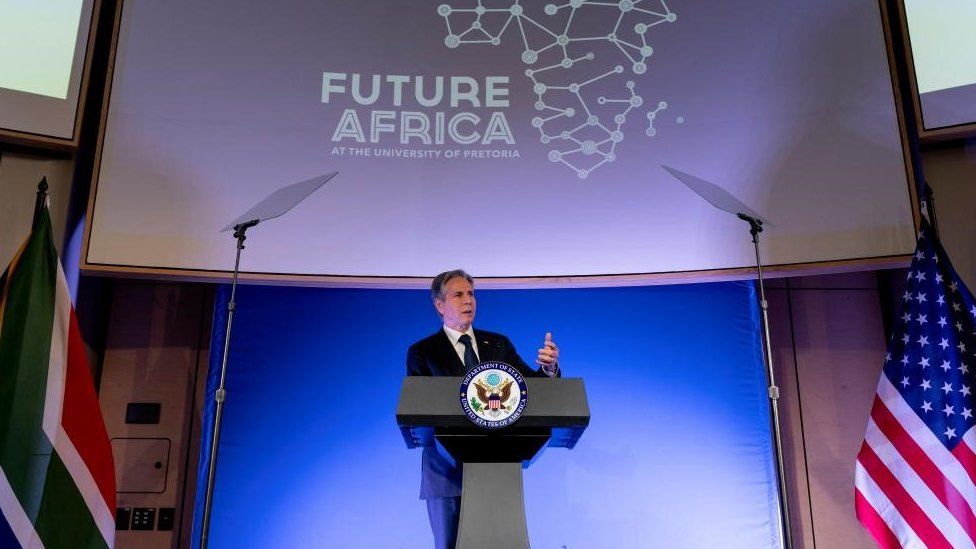 The US Secretary of State, Antony Blinken, giving a speech in Pretoria. Source: Reuters.

Last Sunday, the US Secretary of State, Antony Blinken, embarked on a trip to Africa. Three countries were chosen for this visit, namely South Africa, the Democratic Republic of Congo, and Rwanda. This is his second trip to Africa after visiting Senegal, Kenya, and Nigeria in 2021.

As the BBC reports, the two main goals of this trip are to reconfirm the US presence on the continent amid the concerns raised by the ever-growing Russian and Chinese interest in the region and several other priorities like democracy, investment, security, COVID recovery support, and clean energy.

Concerning the strong Russian presence in the area, Blinken said that US efforts must focus on the eradication of Moscow’s soft and hard power activities. These goals were elucidated in the speech he gave in Pretoria, South Africa.

Accordingly, he declared that Russia must be blamed for the worsening of the global economic situation and the humanitarian crisis that ensued from the war in Ukraine. He said that “Even before President Putin launched his full invasion, 193 million people worldwide were in need of humanitarian food assistance. The World Bank believes that Russia’s invasion could add another 40 million people to this unprecedented number. Most are in Africa”.

On the point concerning the need to boost democracy, he underlined the nexus between democracy and security by referring to the Russian activities in the sub-Saharan countries disguised through the Wagner Group's military interventions. Accordingly, during the same speech he stated that “The Kremlin-backed Wagner Group, which exploits instability to pillage resources and commit abuses with impunity, as we’ve seen in Mali and the Central African Republic,” is to blame for the current state of uncertainty that many African countries are currently experiencing.

Blinken juxtaposed the need for building more accountable African security forces to the use of mercenary groups that bring instability and terrorism. These should work towards the reduction of marginalization that pushes several people towards criminal groups as well as the substantial implementation of human rights. The most important means to achieve this is diplomacy.

Douglas Yates, a political scientist expert on African politics and professor at the American Graduate School in Paris, maintains that countering malign Russian activities and promoting strong democratic values in Africa is the US's top priority. This goal will only be realized through the establishment of a strong partnership with African countries. Accordingly, he referred to a recent act issued on April 27 by the US House of Representatives, the so-called "Countering Malign Russian Activities in Africa Act."

Yates added that the three countries Blinken is currently visiting have been chosen based on this act as they are not considered fully-fledged democracies. The US wants to make sure that the military capabilities developed by these countries will be used to support the American side.

Furthermore, South Africa was chosen since it was one of the several African countries that abstained from voting against the Russian sanctions as was required by the UN resolution. This makes it even more imperative and urgent for Washington to pull the country into its orbit. In this regard, it should be reminded that South Africa is a member of the BRICS, the organization of developing economies, of which Russia is also a member.

Moreover, the visit comes also at a moment when several African states are going or will soon go to the polls. Accordingly, Blinken reminded the elections in Kenya and the upcoming ones in Angola, DRC, Nigeria, and Senegal. He stressed the importance of democratic elections as an opportunity to choose leaders that will take responsibility for their citizens and reaffirm strong democratic principles.

The US fears of enhanced Russian presence are not unfounded. Recently, during his visit to Africa, the Russian Foreign Minister, Sergey Lavrov, met with the Republic of Congo's President, Denis Sassou Nguesso. This was Lavrov’s first ever visit to the country.

Through this trip, Russia attempted to gather support to counter Western pressure after the Ukrainian war started in February. The fact that many African countries have not joined the Western sanctions against Russia can play in Moscow’s favor. Moreover, Russia is wisely using two main arguments to attract the African countries to its side.

The first is that the West must be held accountable for the food crisis because this is the result of the strong sanctions imposed. The second concerns Europe’s colonial past in the continent. Accordingly, Lavrov took the opportunity to sharply criticize the West for its inhuman colonial past and to praise Africa for its struggle for independence despite receiving pressure from the West through its neo-colonial and paternalist stance.

Nevertheless, notwithstanding the (hidden) goals the US and Russia may have in Africa, the only certain thing is that, once again, the continent has been put in the middle of a dangerous tit-for-tat mechanism that, if not handled carefully, can be detrimental to a continent already exhausted by several plagues.