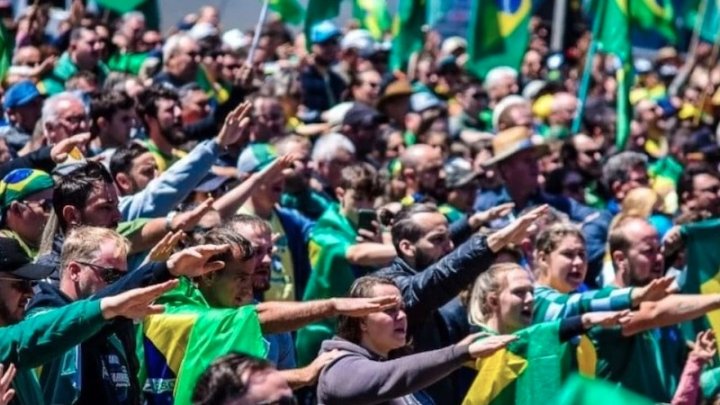 This past Sunday, 30th of October, former Brazilian leader Jair Bolsonaro lost the election to renew his presidency to progressive candidate Luiz Inácio Lula da Silva. Because of this, a large group of Bolsonaro supporters rallied in Sao Miguel do Oeste, Santa Catarina, a city south of Brasil, to show their disapproval of the new president.

That same day, a video showed the protesters pledging allegiance to the Brazilian flag while doing the Nazi salute. On top of this, other videos showed violent protesters blocking the streets, attacking cars, setting off fireworks, and jumping people, among other things.

Upon seeing these images, the Israeli Confederation of Brazil (CONIB) made an official press release on Twitter stating the following: “​​Brazilian society cannot tolerate postures like this. While wearing the Brazilian national team shirt, gesturing like this is also an offense to our Armed Forces, who fought bravely against the Nazi forces in Europe during World War II.”

Similarly, the German Ambassador in Brazil, Heiko Thoms, took to Twitter to give his opinion on the matter: “The use of Nazi and fascist symbols by clearly far-right "protesters" is deeply shocking. Apology for Nazism is a crime! It is not about freedom of expression but an attack on democracy and the rule of law in Brazil. This gesture disrespects the memory of the victims of Nazism and the horrors caused by it.”

The Public Ministry of Santa Catarina (MPSC) has also released a statement on the issue, stating their interest in investigating the case: “MPSC investigates protesters who gave Nazi salutes in the Far West. A group of people apologized for Nazism during a demonstration in São Miguel do Oeste.”

However, yesterday, November 2nd,  the same Public Ministry posted another official statement saying they had run an official identification of the people involved through the São Miguel do Oeste Regional Group (GAECO). They analyzed images, talked to witnesses, and concluded there was no intention of expressing sympathy for Nazism.

“According to the findings, the gesture made by the protesters was made after being called by the event's announcer, a local businessman, to extend their hand on the shoulder of the person in front of them to emanate positive energies.”

These protests, however, have been extending throughout other bigger Brazilian cities like Rio de Janeiro, where protesters called for intervention from the Armed Forces to prevent the “return of communism.” However, the Brazilian Association of Defense Studies (ABIMDE) stated that “in a democracy, the Armed Forces have no say in the electoral process.”

Yesterday, Bolsonaro requested the protesters to end the roadblocks and go home. Still, the former president’s rallying supporters have been camping out on the streets for the past four days and aren’t making moves to stop the protest anytime soon.