BREAKING: One Bill Rescinding 3 Farm Laws To Be Passed In Lok Sabha On 29 November 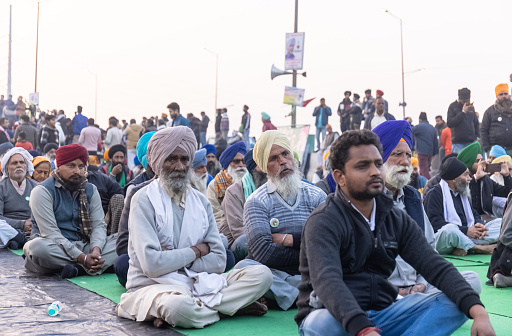 A surprising U-turn took place on Wednesday when a single bill named “The Farm Laws Repeal Bill 2021” was approved by the cabinet which will be passed in the Lok Sabha on November 29, 2021.

According to the sources, “The Farm Laws Repealing Bill 2021", is put on stay mode and is waiting to seek permission from the Prime Minister’s Office.

The farm laws were introduced in September 2020 which faced tremendous opposition from a large section of farmers last year. The three farm laws were 1) Farmers' Produce Trade and Commerce (Promotion and Facilitation) Act, 2020; (2) Essential Commodities (Amendment) Act, 2020; and (3) Farmers (Empowerment and Protection) Agreement on Price Assurance and Farm Services Act, 2020.

This winter session of the parliament will lead to the removal of the above-mentioned farm laws with the emergence of a new bill of 2021.

On 9 September 2020 large sections of farmers rejected the government’s proposal even when the government assured non-scraping of the minimum support price.

It had been a year since the farmers had been protesting on the Delhi borders demanding the withdrawal of the farm bill.

The farmers sat on a 10-hour hunger strike as a symbolic protest against the farm bill proposed by the government.

The Agricultural Ministry is still deciding whether the minimum support price be proposed as guidelines or in a statuary form as demanded by the farmers.

Prime Minister Narendra Modi on November 19 addressed the nation by announcing that the farm laws introduced in 2020 would be repealed to consider the demands of the farmers. The Prime Minister failed to convince the farmers regarding the benefits of this agricultural reform and to quit protesting.

According to minister Anurag Thakur, the cabinet has finished all the formalities to repeal the three farm bills. He further stated that Pradhan Mantri Garib Kalyan Anna Yojana (PMGKAY) would be extended from December 2021 to March 2022, providing free food grains to 80 crore people.

On 26 November 2021, Samyukt Kisan Morcha will be announced by the farmers to celebrate the 1st anniversary of anti-fame law agitation.

The Farmers Produce Trade and Commerce (Promotion and Facilitation) bill allows the farmers to sell their produce outside the agricultural market. Any person who holds a license can buy the produce from the farmer at mutually agreed prices. This bill will remove the state tax imposed on the goods.

The Farmers (Empowerment and Protection) Agreement of Price Assurance and Farm Services Act allows farmers to indulge in free marketing of the produce.

According to the government, the farm laws would give the farmers autonomy to sell their produce anywhere in the country without any restraint. The government also assured that the minimum support price would not be scrapped.

According to Agriculture Produce Marketing Committee (APMC), the middlemen made the farmers sell their harvest either to state-regulated markets or private companies leading to exploitation of the farmers.

According to the farmers, the introduction of the 3 farm bills will bring them in direct contact with the private sector which could exploit them in the future.

Rashpinder Singh, a 27-year-old farmer, claimed that the government has allowed the farmers to sell their produce to anyone across the country, but how can a small farmer store his produce for months? The farmer won’t have access to good storage facilities, and hence the produce will turn into waste.

To avoid the produce to become rotten, the farmer will be compelled to sell it at unsustainable prices.

All the promises regarding the non-removal of the MSP were given by the government in the form of verbal assurance and not written assurance.

It will be very difficult for the farmer to settle the dispute with the private company and eventually lead to an attempt at committing suicide by the farmer.

According to the farmers, these bills introduced by the Prime Minister in the parliament were clearly against the farmer’s interests.

Finally, the bill to repeal the 3 farm laws have been approved by the union cabinet, which could finally end the struggle faced by the farmers for over a year now. The farmers have decided that they won’t go back to their homes until the bill is passed in the Lok Sabha