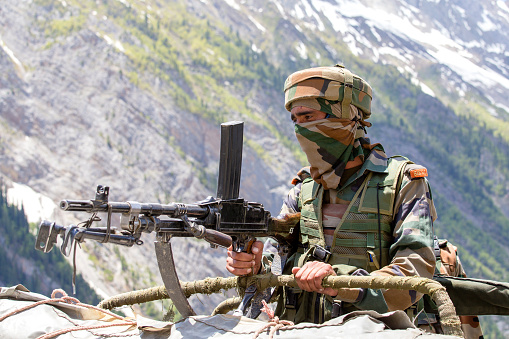 According to the police, a terrorist attack on a police van killed three Jammu & Kashmir personnel and 11 were injured.

The militants attacked the police van carrying 25 J&K personnel near the police camp at the outskirts of Srinagar, Zewan.

After the attack, all the injured persons were immediately shifted to the hospital out of which some of them remain critically ill. One of the deceased victims was a sub-inspector, Ghulam Hassan, while the other was a  section grade constable Shafique Ali and Rameez Ahmad.

PM Narendra Modi had sought details behind the attack and expressed his condolences to the families of the policemen who are “martyred” in the attack.

IGP Vijay Kumar said, “Credible sources revealed that the attack was carried by Kashmir Tigers, an offshoot of the JeM.” He further added, “In retaliatory firing one of the terrorists was injured.” The group involved in the attack will be soon brought to justice”.

This indiscriminate firing on the police van led to retaliation the very next day when the security forces killed Jaish-e-Mohammad (JeM), a local terrorist, in the Pulwama district of south Kashmir.

ANI reports that Vijay Kumar, a member of Jaish-e-Mohammad, has claimed responsibility for the Srinagar attack. According to a police spokesperson, the search operation gave the trapped terrorist several opportunities to surrender, despite that, the terrorist denied and fired upon the search party which reciprocated leading to the encounter of the terrorist.

According to a police spokesperson, few checkpoints were made by the police in the Wanbal area of Rangreth. “During frisking at one such checkpoint two suspected persons, on noticing the police party, fired indiscriminately on them. However, the fire was effectively retaliated leading to a brief encounter …….two terrorists were neutralized on the spot.”

The police stated that according to the preliminary information, three terrorists were involved in this indiscriminate firing on the police van which was carrying the armed personnel back from their duties. Though the personnel retaliated to the firing,  the darkness of the night gave the terrorists an opportunity to escape.

Zewan houses are the J-K police’s armed wing complex which is the home of many armed police battalions. Lieutenant Governor of Kashmir condemned this attack on the armed personnel in Srinagar.

Earlier that day two LeT militants were killed by the Srinagar police in a “chance encounter” at the Rangreth area of Srinagar. The identified militants were Aadil Ahmad Wani from Shopian’s Daramdoora area (a Pakistan-trained ‘A’ category terrorist) and another unidentified foreign terrorist. Wani was seen behind many attacks in north Kashmir’s Sopore.

According to the police “Two A-K rifles were also recovered from the spot of encounter”.

This attack is considered one of the biggest attacks on the security forces after the Pulwama attack in 2019 and the repudiation of J&K’s special status.