BTS delivers “smooth as butter” performance to conclude the 2021 AMAs 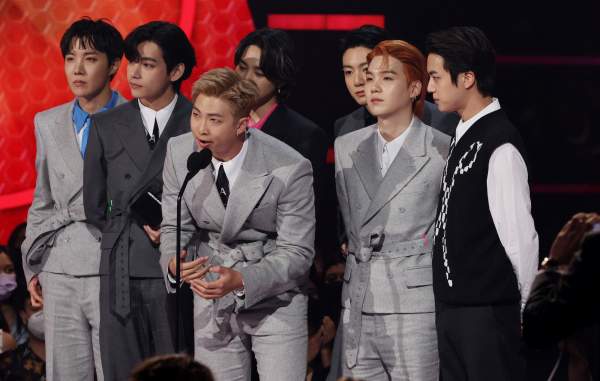 BTS won awards in all three categories nominated for, including this year's Favourite Pop Song for their record-breaking hit single "Butter." The Korean boy band was also awarded the coveted title of Artist of the year which was a first. Finally, they were also awarded the title of Favourite Group or Duo for the third time since their inception in 2013.

The group shared its happiness and joy on Twitter by thanking all their supporters and fans worldwide. BTS also shared the stage with Coldplay to perform their latest release “My Universe” and their award-winning hit single “Butter.” Singer Megan Thee Stallion was also scheduled to perform with the group but had to cancel owing to an unexpected personal matter.

The group's accomplishments delighted BTS fans worldwide. One fan commented, “So deserved Kings, we love you too! Congratulations!”, while another chimed in with “Congrats my boys! I have no words for how damn proud I am of you! I'm so happy for you. And I can't wait to see you perform one more time tonight And JK DON'T WORRY. YOU DID GREAT. You're such an amazing person. I love you all so much!”

The acceptance speech given by BTS has gone viral. The phrase, "Please Wrap It Up" has also become popular, all thanks to Golden Maknae aka Jungkook. the phrase has grabbed ARMYs attention. This was the first time since the COVID 19 pandemic that the BTS spoke to their fans who go by the name “The Purple Army.” Fans believed that the boys should have been given the liberty to speak at length.

This year's AMAs took place inside the iconic Microsoft Theatres in Los Angeles on Sunday night.  The event featured ecstatic performances by pop stars such as Olivia Rodrigo, Jennifer Lopez, and Chris Martin. Taking the stage for the first time after Queen Latifah, Cardi B made history as the second female rapper to host the ceremony.

BTS and Olivia Rodrigo stole the night at the ceremony, with Olivia being nominated in seven categories and being named New Artist of the Year.