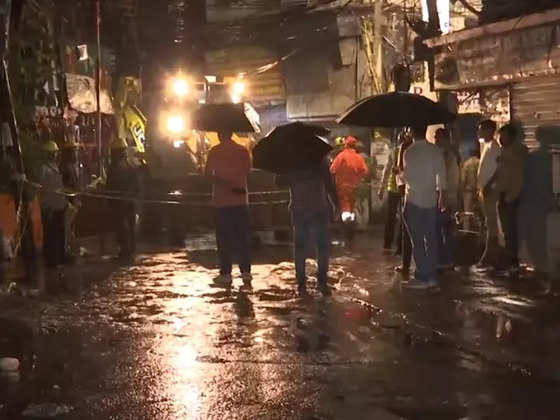 Around 7.30 p.m., a call was received reporting a roof collapse in the Lahori Gate area, according to Delhi Fire Services Director Atul Garg.

On Sunday evening, the roof of a building fell in New Delhi, injuring at least five people and trapping three to four more, according to a Delhi Fire Service spokesman.

Around 7.30 p.m., a call was received reporting a roof collapse in the Lahori Gate area,

according to Delhi Fire Services Director Atul Garg. Five firefighters were dispatched right away. Five persons have now been transported to the hospital to find others. A rescue mission was in progress.

neighborhood of Delhi. The Delhi Fire Services is responsible for the rescue effort with five tenders on the scene. Five people have so far been saved and sent to the hospital.

The building collapsed after the city had its second-highest 24-hour rainfall since 2007. The 24-hour rain in Delhi was 74 mm, less than the 87.9 mm that fell on the same day last year.

The city's air quality index improved due to the rain, with a daytime average of 48 to 50.

The rains falling now in Delhi are not monsoon showers, which left the city on September 29 after dumping 516.9 mm of rain—as opposed to the city's typical rainfall of 653.6 mm—in the area.

According to the weather service, the post-monsoon rain in the Delhi-NCR region was caused by the interaction of a western disturbance in the mid and upper air with a deep easterly wind trough at a lower level.