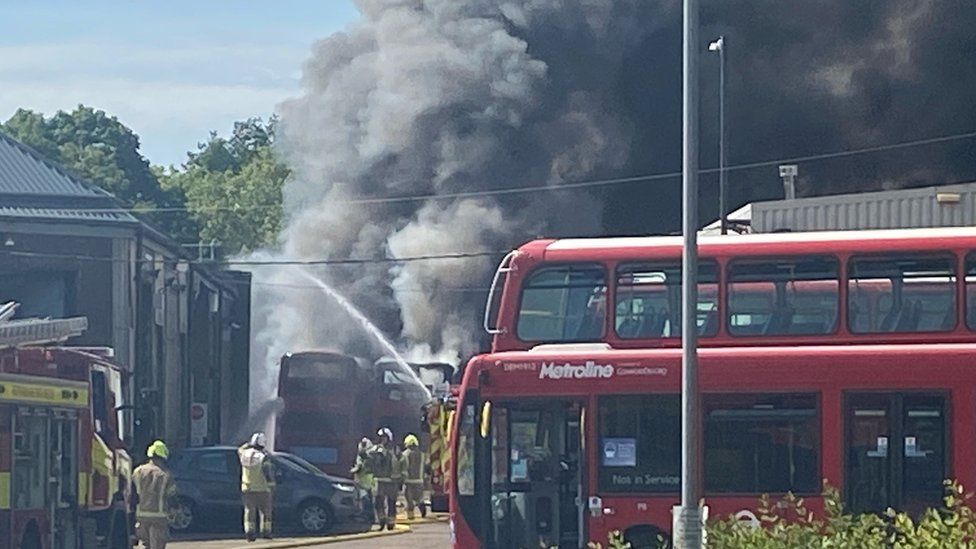 Emergency crews were called at 14:36 BST to attend the scene as heavy smoke filled the town centre.

Mr. Hopcraft stated: "Thanks to the efforts of the firefighters involved, the fire was contained to six buses and did not spread to cause further damage to other buildings and vehicles."

Shaun Cunningham, an eyewitness at the scene, told the BBC: “[I heard an] unbelievable noise that sounded like a jet.” And he watched as a bus exploded into flames.

The Potters Bar fire brigade received over 70 calls regarding the fire, and it was their priority to evacuate the area as soon as possible in case of future explosions.

Metroline is the bus company that the depot is home to with buses running from Hertfordshire to London.

A spokesperson from Metroline told the BBC: “We can confirm that all personnel were successfully evacuated and that there were no injuries. We will work closely with the emergency services to investigate the cause of the fire."

Mr. Cunninham told the BBC: “When I looked out my window, one of the buses exploded in a ball of flames.”

Paul Kirkby, a BBC reporter on the scene, said that workers were relieved that the diesel supply underground was undamaged.

It's estimated that seven of the depot's hybrid buses were caught in the blaze.

Kirkby said: “You could hear several loud bangs which they said were tyres.”

Some of the buses were able to be saved, but those at risk of fire and explosion stayed put.

Charley Clark Tweeted a video captioned: “Potters bar bus garage. Electric buses have blown up whilst being on charge.”

Investigators were still on the scene yesterday, ensuring that they find the cause of the blaze.

The roads are no longer closed, but a section of the bus depot is still closed to the public.