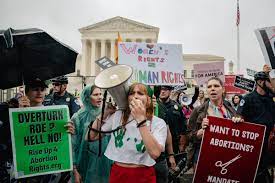 United States- In the wake of Roe v. Wade being overturned by the Supreme Court this morning, June 24th, there is no longer a federal constitutional right to an abortion. Abortion rights will now be determined by individual states, and most conservative states will likely strictly regulate or ban abortions altogether.

In one of the most impactful Supreme Court decisions in recent memory, overturning Roe v. Wade will be consequential to women’s reproductive health for years to come.

Justice Samuel Alito, part of the majority ruling in the decision, wrote; “Roe was egregiously wrong from the start, its reasoning was exceptionally weak, and the decision has had damaging consequences.” The vote was 5-3-1 in favor of overturning the ruling.

Justices Stephen Breyer, Sonia Sotomayor, and Elena Kagan, who were the three to vote against the ruling, wrote; “With sorrow- for this Court, but more for the millions of American women who have today lost a fundamental constitutional protection- we dissent.”

Quoting Oregon Governor Kate Brown; “Abortion is health care, and no matter who you are or where you come from, Oregon doesn’t turn away anyone seeking health care. Period. Let me be clear: You cannot ban abortion, you can only ban safe abortions — and this disgraceful Supreme Court decision will undoubtedly put many people’s lives at risk, in addition to stripping away a constitutional right that disproportionately affects women and has been settled law for most of our lifetimes.”

In 2017, Oregon enacted the Reproductive Health Equity Act, which expanded access to reproductive healthcare and also codified the right to an abortion in state law. That was the first bill of its kind, it is still considered the most comprehensive reproductive health legislation. Oregon has also invested $15 million in reproductive health organizations, to provide support to low-income and rural communities.

The Overturn of Roe V. Wade: The Effects

A Constant State of Reckoning: What Recent Roe v. Wade Rulings Reveal about US