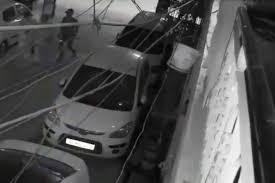 Delhi isn’t safe anymore. Why I’m asserting this? Chain-snatchers continue to prowl in the city. There is an increase in the number of Chain-snatching cases predominantly targeting women, even those standing in front of their houses.

Let me tell you about a chain-snatching incident that transformed into a bloodbath.

On 27th February 2021 around 9:30 pm in Adarsh Nagar, Simran Kaur (as identified from CCTV footage), a 25 years old married woman was killed by a chain snatcher.

The lady was returning home from a weekly market together with her mother, carrying her 2-year-old baby. They were not aware of a sequence snatcher following them, with another thief dawdling on his bike to help him flee away after grabbing her gold chain, without being caught. The chain snatcher was trying to snatch her chain, however, the strong lady fights back to resist the robbery. During that incident, the chain snatcher stabbed her to death with a knife and ran away. This was all recorded in the CCTV camera that was installed on the road. The woman was recognized as Simran Kaur, who died at a hospital. She was residing in Canada for the past two years with her husband and her baby. She came to spend some quality time with her parents in Delhi. She had never imagined that this vacation would give her a tragic, unfortunate, and uncertain death and can bestow pain to her loved ones forever.

Well, this was not a sole case in Adarsh Nagar! Daily there is a replacement case of chain snatching and robbery. A few days back at 3:00 pm a woman was on her way to the market where two chain-snatchers came on a motorbike and snatched her chain firing in the air to create fear within the people around so that nobody can follow them. But nobody was hurt therein incident. At that moment police patrolling has started to rescue the incident. I believe it’s very important for the presidency and police officials to take some essential measures to provide security to the civilians.