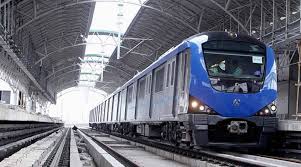 After complaints by patrons, Chennai Metro authorities are making efforts to make stations disabled friendly. The absence of ramps, slippery flooring, ticket counters unsuitable for wheelchair users, inadequate toilet facilities are some of the issues faced by people with disabilities at Chennai Metro stations.

In a release made by the Chennai Metro Rail Limited (CMRL), it was stated that officials were looking into ongoing construction work at the station, including the development of ramps, support handles in toilets, tactile tracks, drinking water facilities, ticket counters at an accessible height and more. The changes have been approved and are ongoing under the director of CMRL, MA Siddique,

The authorities of CMRL are monitoring the retrofitting processes at 32 Metro stations in the city after giving an undertaking before the Madras High Court that all metro railway stations would be made disabled-friendly within six weeks in accordance to an audit report which found deficiencies in providing easy free access to disabled individuals.

The matter was brought to their attention after disability rights activist, Vaishnavi Jayakumar, filed a PIL against Chennai Metro Authorities, directing them to make their metro stations more disabled friendly. In reply to Vaishnavi Jayakumar’s petition, the CMRL told the Madras High Court in the third week of June that it would retrofit all the stations to make them disabled-friendly within six weeks.

Some of the issues highlighted are inadequate information boards/portals, helpdesks, lack of ramps at entry and exit points, dangerously slippery flooring for those on crutches, ticket counters not designed for wheelchair users or those with dwarfism and poor toilet facilities. Aside from this, there's also the issue of lack of parking spaces for wheelchair users and no dedicated seating areas arranged for disabled individuals at the stations.

In the release, the CMRL chief stated that the ramps would be designed at entry and exit points at a moderate, reasonable level, adding that the rainwater drains along the pathways will be kept closed so that crutches used by people with disabilities do not get stuck in them.

The CMRL director, MA Siddique, said they are trying to quicken the process to finish all work undertaken within a month. He said that various contractors  have been brought in and 32 stations are to be covered. He assured that the ongoing works are small components being completed in order and that the authorities are monitoring everything, making sure that they can make all the necessary changes for the majority of the stations within this month.

Preserving Peace through Water: The Indus Water Treaty between India and Pakistan.