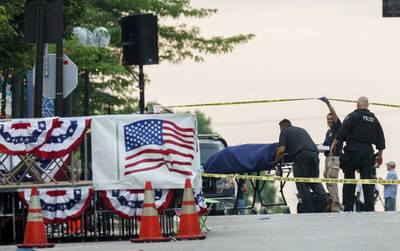 American police announced they have arrested a man after a shooting in the suburbs of Chicago that killed six people.

It took nearly six hours to arrest Robert "Bobby" Crimo III, who was described as 22-year-old white, armed and dangerous.

The shooting happened during a ceremony in Highland Park, a suburb of Chicago. The ceremony was stopped ten minutes after it started with the sound of gunfire.

City officials say that 24 people were injured and hospitalized.

The attacker did this from a rooftop overlooking the area. The police found this gun on one of the roofs.

For more than 6 hours after the shooting, with the help of trained dogs and special drones, the police were looking for the attacker or a clue about him, and in this search, they first found a weapon related to this shooting.

“We had rallied for our community and our freedom, but we were forced to mourn another tragic loss of life." Highland Park's mayor said.

Resident Miles Zeremsky told the Chicago Times that he heard 20 to 25 rounds of gunshots, which indicated that the assailant's gun was not an ordinary weapon.

An eyewitness named Michael also told local television, "The attacker suddenly started shooting to our left and a woman fell to the ground."

The mayor of Highland Park said that the celebration was canceled and asked people to stay away from the city center.

The nearby neighborhoods were also in a police situation for some time.

Anand, one of the eyewitnesses, told BBC that at first, he thought the sound was from the exhaust of a car, but then he realized that it was gunshots: "It was one of those guns that fire a lot of bullets in a very short time. It was very long. Then everything got quiet."

According to him, armed violence is very rare in this area of Chicago, so he did not suspect shooting at first.

In Chicago, the rate of gun violence is usually higher during the summer holidays, as the warmer weather draws more people to the streets.

Illinois Governor J.B. Pritzker warned at a news conference that mass shootings in America are becoming "a weekly American tradition." He said he was outraged by the incident, and while some would say it's not yet time to talk about gun restrictions, he insists now is the best time to do so.

US President Joe Biden told reporters outside the White House that he will continue his fight against "the epidemic of gun violence" and will not give up.