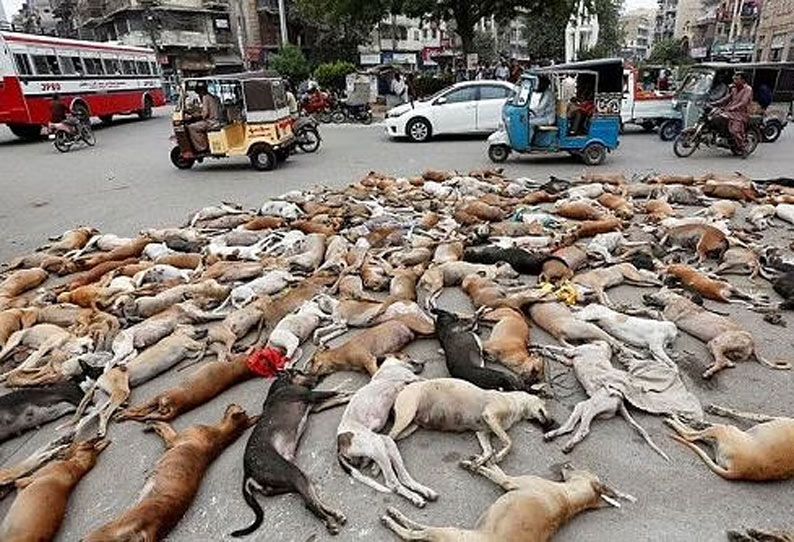 Yes, we understand animals are unpredictable and threatening. Yes, we should protect the public, but why is a massacre the first action taken? This couldn’t be any more ethically and morally malicious. Cheetahs are brought in special cargo flights while 100’s dogs are tied to sticks to god knows be put to death how and where. What does this say about us and our values as an ancient civilization, a democratic developing country with strong religious and spiritual beliefs?

Does a dog's fear warrant poisoning it to death? In some regions of Kerala, citizens took the law into their own hands and killed all the current stray animals overnight instead of alerting the police.

While stray dog attacks and rabies-related deaths are rising, people in Kerala seem to handle the issue independently.

At Changanassery in the Kottayam district on Tuesday, a stray dog was publicly put to death. A wreath was also placed near the animal. In the Kottayam district's Mulakulam on Monday, ten dead stray dogs were found. The neighborhood thought the dogs had been poisoned. The incident is the subject of a police investigation.

Unnamed people have been accused of violating Indian Penal Code Section 429, which deals with crimes against animals, according to Velloor police, according to PTI.

IPC Section 429 addresses mischief involving the killing or maiming of an animal. In light of the rise in such incidences, People for Animals Trivandrum has asked the general public to alert them if they become aware of any instances of dog attacks.

Acts of aggression toward dogs are prohibited by The Prevention of Cruelty to Animals Act of 1960, according to animal rights campaigners.

In August 2022, a teenager in Raipur who had gotten acid from his uncle's business hurled it on six stray dogs because he didn't appreciate their loud barking. The teenager was released following the investigation and is now free to roam, while the other acid attack victims are still in severe pain, and four of them passed away.

In a village in south India, two men tethered a dog too large stones, and as a third man recorded the incident on camera, they threw the dog into the nearby river. They are allowed to roam as well.

Separately, two children tied a stray dog's legs and thrashed him mercilessly. The screaming can be heard in the video even though the body was never found.

There is little doubt that if the government is granted this permission, all stray dogs will perish because there is no assurance that the rabies-prone dogs' proof will be obtained and the diseased animals will be humanely laid to rest.

Alternately, every stray dog will be killed in the name of prevention since they are considered unclean and dangerous. When these same stray dogs are run over, tormented, or raped, whose court can they go to to get justice and peace? These same canines' defense will always be viewed as unlawful when they suffer because of the threat people pose to them.

Animals who have been injured or are suffering from severe conditions like cancer or tumors are constantly being rescued by a large number of NGOs and animal advocates.

These organizations use their funds or donations from other animal lovers to relocate and rehabilitate these helpless, voiceless creatures. However, the majority of eyes will always perceive them as a burden, something they don't want, and something that irritates their eyes.

These animals have hearts and emotions. All they ask is shelter from the heat and cold, access to clean water, and, if possible, leftover food. Instead, they face hatred, ignorance, loneliness, and, in a worst-case scenario, miserable death.

OUTRAGE AND RESISTANCE TO ANIMAL RIGHTS

Animal rights opponents would prefer that these animals starve to death. They question why killing a dog carries a punishment but not filing an FIR for killing a bug.

Many have abandoned efforts to shield stray dogs from inhumane practices due to dog attack instances. Why should hurt dogs in other situations experience suffering and misunderstanding?

According to research conducted by All Creatures Great and Small and the Federation of Indian Animal Protection Organisations (FIAPO), 4,93,910 animals were involved in various incidents between 2010 and 2020. (ACGS). However, this does not imply that all of these animals were mistreated. The majority of states, according to the paper, do not keep track of offenses involving animals. Thus, there is no data to research.

Utilizing newspaper articles and other secondary sources, the organization compiled some figures and carried out primary research.

According to the report, there have been 258 crimes committed against wild animals and birds, 720 against street animals, 741 against working animals, 588 against companion animals, and 88 against agricultural animals.

Over 400 of the 1,000 assault incidents involved violent assaults like beatings, kicks, torture, acid or boiling water throws, body mutilations, and attacks with blunt objects or knives.

The government acknowledges that the PCA act's sanctions lack real deterrent power. Since it was passed 60 years ago, the Prevention of Cruelty to Animals Act has not undergone any substantial changes.

For crimes involving animals, the fines are still in the low tens to one hundred rupee range. This could be a factor in the ineffectiveness of the law in preventing animal mistreatment.

In the Lok Sabha, the administration admitted that it had received several suggestions, petitions, and cries from various social groups requesting that the existing PCA act penalties be raised.

A draft bill called the Animal Welfare Act 2011 was released in 2011 to replace the law from 1960. However, it was not well received.

India must also ensure that the NCRB or other organizations maintain and make accessible data on instances of animal cruelty, just as is the case with other offenses.

India might take a page from developed countries like the UK, where violating the law can result in fines up to £20,000, a 51-week maximum prison sentence, and a lifetime ban on owning pets.