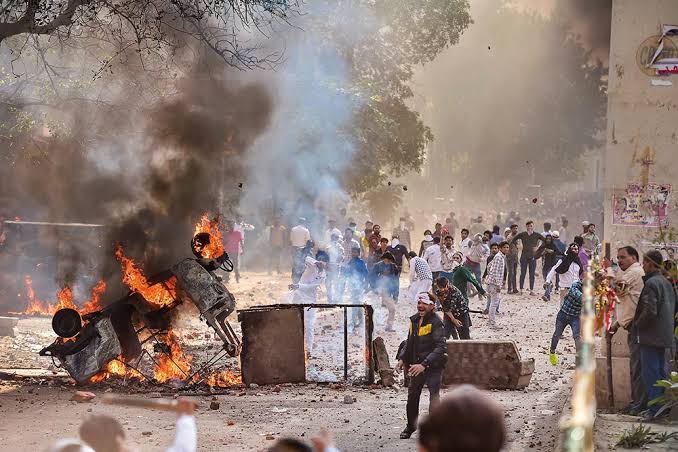 High alert was issued in the national capital and neighbouring districts of Uttar Pradesh on Saturday after clashes between two groups in Delhi’s Jahangirpuri during a “Shobha Jatra” on the occasion of Hanuman Jayanti.
The incident took place shortly after 6pm, injuring a number of people, including six police officers. Police claimed that ten teams had been formed to identify and prosecute those involved in the incident, and that two companies of the Rapid Action Force (RAF) had been dispatched during the local police procession.
According to a senior official, the Delhi Police Special Cell has been asked to investigate whether the incident was the result of a pre-planned conspiracy. According to police sources, there have been multiple processions in the area throughout the day; The collision occurred at 5:40 p.m. When the third such procession starts and goes past a local mosque. After throwing stones, members of both sides were seen displaying firearms as they challenged each other, firing into the air and even engaging in arson within the next 20 minutes, as seen in the viral recordings of events. As the initial news of the clash started coming around 5:30 pm, those involved in the attack carried out the attack on those who were summoned to the spot. While a police officer was injured in the gunfight, police also received reports of vandalism and robbery at local shops.
According to MHA sources, Union Home Minister Amit Shah phoned Delhi Police Commissioner Rakesh Asthana, who informed him that the matter was under control and was being monitored on the ground by senior police officers. LG Anil Baijal has criticized the incident and assessed the matter, including Mr Asthana. He asked them to deploy troops to all other designated unprotected locations across the city, as well as to guarantee adequate care for injured police officers.
A sufficient number of additional forces have been stationed in Jahangirpuri and other critical regions. Senior officers have already been ordered to remain in the field to closely monitor the law and order situation and to patrol. Rioters will face harsh punishment. “Mr. Asthana tweeted Citizens are advised not to believe rumours and fake news on social media,” he added in a following tweet. Arvind Kejriwal, the Chief Minister, tweeted, “Spoke to Hon’ble LG. He stated that all measures are being taken to preserve peace and that those responsible will not be spared.” Adesh Gupta, head of the Delhi BJP, called the incident a plan to destabilize peaceful coexistence in the city and alleged the AAP Delhi government of working hand in hand with those behind it, blaming the violence on “Bangladeshi and Rohingya” immigrants living in the neighbourhood.