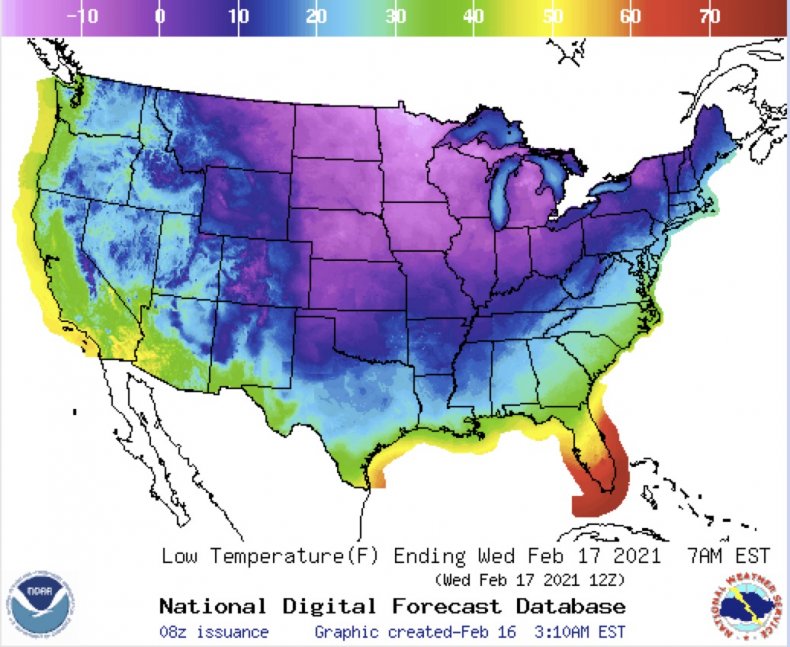 Dangerous winter weather events like this impending storm are why the term “global warming” has been rebranded to “climate change.” The existential threat is an issue of warming atmospheric temperatures, but the deadly effect of those warming temperatures isn’t. heat-based disasters. Blizzards, flash freezing temperatures, white-out conditions, and many other cold-based impacts of climate change can be just as, or even more deadly than, heat-based disasters.

The real damage of a winter storm isn’t likely to present itself in the areas getting hit the hardest. The Sierra Nevadas, middle of Idaho, North Dakota, and South Dakota, are used to seeing this level of winter weather and, more historically. So, the residents of these areas will be more prepared for road closures, and the infrastructure will be more prepared for heavy snow. Local and state governments will know which roads to close, will have an effective plow system for clearing the streets quickly, will have a winterized power grid, and finally will have adequate drainage and damming systems for the snow melt runoff. States and Canadian provinces that deal with this kind of snowfall yearly have had to evolve to that infrastructure level to continue functioning.

So, although California’s Sierra Nevada, middle Idaho, North Dakota, and South Dakota are going to get hit hardest by these winter conditions, these areas shouldn’t be too worried about the storm’s impact. However, large parts of New Mexico and Arizona are not infrastructurally prepared for such winter events. According to the CNN weather map, the storm can reach from Oregon to Michigan longitudinally and Wisconsin to Arizona and New Mexico Latitudinally. In the northern plains, CNN says there’s potential for 35MPH winds, reduced visibility, and drifting snow on Monday night thru Thursday. Certain parts of Arizona and New Mexico have the potential for infrastructural failure. Particularly the more southern and rural parts of the two southwestern states are used to high temperatures rather than low. This is one of the ways that a winter storm could be particularly deadly.

Take, for example, the large-scale power grid failure in Texas on February 10-27th last year. A winter storm on the north Gulf coast brought record-breaking low temperatures to the American Southwest. In Texas, the Dallas/Fort Worth area recorded the lowest temperature ever seen in Texas history at -2 degrees Fahrenheit (-16 degrees Celsius). This is, of course, nothing to people living in the northern Midwest and West and isn’t directly the cause of the damage and death in that February in Texas. It is, however, the cause of the power grid failure.

The reason why the grid went down is because of non-winterized power grid equipment. This means they don’t have equipment that clears the stagnant water out of the condensing pipes, which guide steam and other essential vapor and liquids around the machinery. When that water builds up and freezes, pipes crack and become unusable. This increases the load of steam and smoke on the functioning pipes, increasing the likelihood of water buildup and more freezing and cracking.

Even during winter, Texas is a state that rarely sees freezing temperatures. Beyond that, they never see freezing temperatures for any extended period. Winterizing power equipment is expensive, so without the need for winterization, there was no incentive to do so. In other words, the Texas power grid was never winterized. This problem, combined with the poor insulation of Texas homes in response to their typically humid and hot climate, killed the Texas power grid for a few days and left Texas homes undefended. Some 4.5 million homes and businesses were left without power, and the Texas Department of Health and Human Services attributes the direct death toll of the event to 246 people.

Thankfully Texas isn’t supposed to get struck by this incoming winter storm because the Texas power Grid has still yet to be winterized.  Arizona and New Mexico are not so lucky, though. With similar climates and slightly better infrastructure than Texas, they are both at risk of statewide power grid failures in this winter storm. Major city centers like Albuquerque, Santa Fe, Phoenix, Flagstaff, and many more; have more updated cold-weather infrastructure than significant city centers in Texas but depending on the strength and impact of this storm, they could be overwhelmed by the cold fronts. Notably, rural areas are at risk. Places like Santa Fe and Phoenix have winterization on a significant enough portion of their power grid infrastructure, partly due to the cold temperatures that desert nights can bring and other complicated factors. Still, a substantial number of rural areas in New Mexico, and particularly Arizona, are not prepared for such an occurrence.

All that said, New Mexico and Arizona are unlikely to see any crisis from this winter weather event. The statewide power grids have the potential to struggle in this event, but they will both be able to draw power from the Western Electricity Coordinating Council’s (WECC) power grid. The WECC is a Bulk Electric System or BES, which essentially means it covers a wide swath of land and populations, crossing state and country lines. The WECC covers the northwestern portion of the US explicitly, stretching from the southeastern edge of Arizona to the northwest border of populated British Columbia.

For potential power grid failure prevention, Arizona and New Mexico’s participation in the WECC allows them to draw power from other WECC-affiliated power grids. So basically, if any pivotal power grids in the two states go down, they will be able to rely on power grids that didn’t fail in other states or provinces like BC, California, or Oregon.

A significant reason why the Texas failure turned out to be such a predicament is that they have their state-wide power grid. The Electric Reliability Council of Texas, or ERCOT, is the only Independent System Operator, or ISO power grid north of Mexico. It supports 25 million Texans and 90% of Texas’s land. The WECC regulates the other 10% on the western tip of Texas and the Southwest Power Pool or SPP on some northern rectangles. The power grid hosts a collection of different energy sources Natural gas, Wind, Coal, Nuclear, Solar, and a bit of Biomass. Still, the ISO was created based on Texas’s robust oil-extracting industry in the Gulf of Mexico. Now natural gas only makes up 53% of their energy grid. This calls into question the continuation of their ISO status, which was implemented in 1930 for reasons irrelevant to the state’s power grid for some time.

Outdated infrastructural decisions. Like Texas’s ISO status, it is pretty standard in the US. Many dams, roads, bridges, city designs, etc., don’t account for modern infrastructure needs. Some directly threaten the safety of those relying on that infrastructure; some use environmentally damaging systems when clean, more-sustainable systems are available. New Mexico, Arizona, and all the other states affected likely won’t see power grid failures. Still, it remains to be seen what other curveballs this storm and future storms could throw at these outdated pillars of US infrastructure. There is no guarantee what tragedy awaits if the infrastructure is not improved and designed more sustainably.