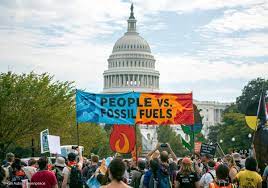 Climate activists removed the provision in a September budget resolution from Senator Manchin that he negotiated with Senate Majority Leader Chuck Schumer.

Mr Manchin’s proposal ended up as part of the fiscal 2023 National Defense Authorization Act (NDAA), which was scheduled for a vote on December 6 by the House of Representatives.

This vote remained unpublic, until it gained resentment from People Vs Fossil Fuels. The night before the vote, Manchin’s legislature was removed from the NDAA draft text that was released Tuesday night.

It required the fracked gas Mountain Valley pipeline completion, included ties with the American Petroleum Institute while increasing coal and gas infrastructure which polluted our ecosystems and harmed the surrounding communities.

“(The bill) is permitting a giveaway that benefits those who continue to line their pockets at the expense of those affected by climate disasters.” Ebony TwilleyMartin, Greenpeace USA co-Executive Director said.

He added: “Senators Manchin and Schumer’s Dirty Deal are sending a clear message that Big Oil is willing to sacrifice entire communities, especially Black and Brown communities, in the pursuit of profits.”

Manchin is still pursuing its application after the bill, most likely by attaching it to the spending bill at the end of the year. People Vs. Fossil Fuels urged: “This fight is not over. We stopped this dirty deal twice, we will make sure it’s stopped again.”

If you're interested in joining the fight. Go to the link and sign petitions, call your representatives, and ensure climate justice is the number priority on all ballots.