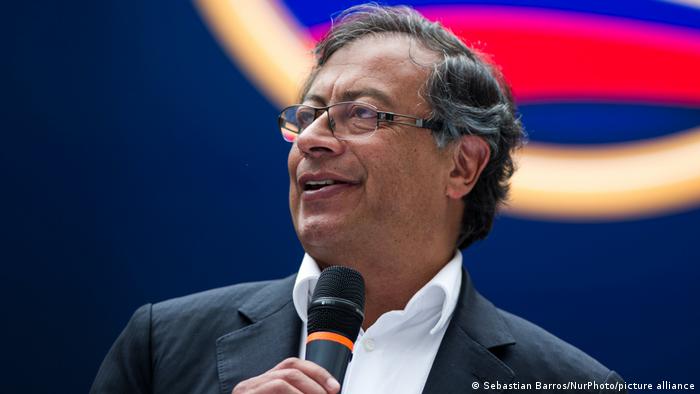 The pictures of Petro with his pets and the headlines point out that a man who loves animals would never hurt anyone. Clearly, they don't know about Hitler. Children hugging leftist candidate Gustavo Petro in a school evokes the cult of personality, just like the North Korean regime, or any other regimes, Mussolini, Stalin, Franco.

The cult of personality is promoted in Colombian public schools to glorify the figure of the presidential candidate of the extreme left, Gustavo Petro. Who promises an utupical change for the country, and people seem to have forgotten what he used to do as a known terrorist. Teachers who were supposed to provide knowledge, teach children to flatter the man who intends to reach the Casa de Nariño. These scenes of alleged indoctrination, typical of communist regimes, are already observed in Colombia, Petro being only a candidate, but they threaten to multiply if he manages to take power.

It happened in its neighboring country, Venezuela, in 1998 when the late dictator Hugo Chavez, who had been imprisoned for years and was pardoned, ran for the presidency and made these scenes, developing a cult of personality when he was the president, which reached even beyond its borders. Today, Venezuela is a country that suffers the highest case of hyperinflation in the world and has the second-highest number of migratory crises in the world.

https://bit.ly/3O0WxxP here you can see preschool children singing choruses in favor of a political candidate, children who should go to school to learn, and nothing more, since that is what schools are for and not to be part of political indoctrination.

The infiltration of Gustavo Petro's political campaign in schools one week before the ballot against candidate Rodolfo Hernandez, scheduled for Sunday, June 19, is an example of the consequences of the alliance between the Colombian Federation of Education Workers with Petro. Educators should precisely educate and not maintain a political tone, much less in schools where young children attend, since they are not voters.

The association openly supports him but denies that there is any kind of indoctrination in schools. These comments have no support when background information is analyzed. Last year two cases were known, in Cali and another in Bogota, in which students were assigned questionnaires of a political nature in support of the ideology promoted by the leftist party of which Petro is a member. The excuse was that the teachers were in a political campaign, which is how it was justified.

This campaign to adore Petro as a man of the people is a perverse communist technique that attacks childhood, being children victims of an ideology that seeks to forge their minds prematurely to the political world. Talking about child indoctrination is not something new, it has always been seen in communist regimes.

In Venezuela, Hugo Chavez and his "Chavismo" movement made it an obligation. National and private schools had to comply with the "anti-imperialist campaigns" and this included drawing and representing the legacy of Hugo Chavez, as well as using only a collection of study books for all levels designed by the Chavez government. The textbooks were free and the children were exposed to the ideological control created by the dictatorship. In addition to this, in hospitals and government institutions, on public streets, and on billboards, posters of Hugo Chavez and Simon Bolivar were a rule and there was even a campaign known as "Aquí no se habla mal de Chavez", these posters were on doors and windows as a warning to anyone who dared to complain about the government in public places.

In Cuba, the regime has been providing child indoctrination on the island for more than 60 years. The children must participate in political events, worship the figure of Fidel Castro and shout slogans in favor of the revolution. For the regime in Havana, indoctrination is vital to guarantee the survival of the system in the next generations.

Further afield, in North Korea, the anti-American discourse circulates in all possible formats, including cartoons, where the main characters are transformed into soldiers to exterminate invading forces. Documentary North Korea: A day in the life, made by Kim Jong-un's regime, portrays how the little ones in Pyongyang grow up under submission, flattery and military obedience to castrate their desires and will.

In the case of Gustavo Petro, the idealization of his proposals seems only a last campaign resource, considering the educational dreams of his Bogotá Humana Development Plan, when he administered the Mayor's Office of Bogotá, were half-fulfilled. The inability to execute plans, programs, and projects forced him to measure his promises; although the future he offers seems bright on the horizon, many have evaluated his management, and everything seems to just planned without support.

On Sunday, Gustavo Petro was elected as the president of the Caribbean nation. Petro was a terrorist linked to Las Farc, a terrorist organization located in Colombia; for decades they have caused terror to their citizens and foreigners have been kidnapped. God bless Colombia and its people. We wish this coming presidential period is good and filled with hope.