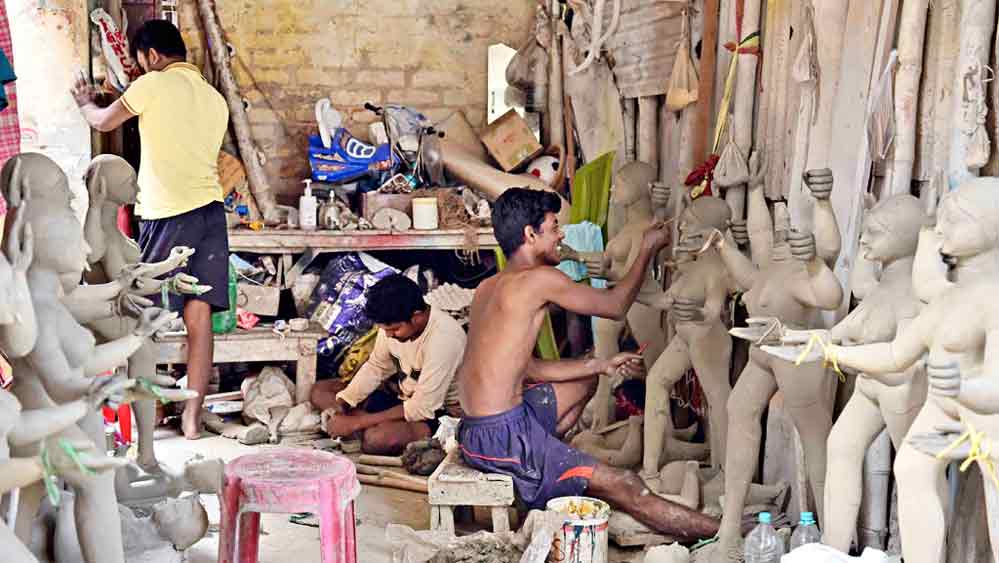 The third wave of the COVID-19 virus has the entire nation on edge. At the same time, the biggest and most important festival, which is majorly celebrated in West Bengal, is just around the corner and preparations have already begun.

Durga Puja is supposed to be celebrated this year too, but only if all of the rules and regulations of COVID-19 are followed. The artisans have already begun work on the goddess's sculptures, and are preparing to greet "Maa Durga" as they do every year.

The concerning matter is that the artisans from various districts who gather at Kumartuli to make the sculptures are not yet vaccinated which has caused uneasiness among the people of the area.

The general secretary of the Kumartuli Pottery Culture Association, Babu Pal, stated, “Around 300 artists from the neighbourhood have gathered to create the goddess sculpture. However, the majority of them were not vaccinated. So everyone is anxious. It would be better if the municipality made arrangements to provide Vaccines for the artists and craftsmen of Kumartuli."

In Kumartuli, artists and craftsmen have been creating sculptures of goddesses in congested studios, each located right beside one after another. So, the risk of spreading the virus is high because maintaining social distance is out of the question with all the studios being so close to each other. Several Kumartuli potters have already received the vaccination. However, craftsmen who come from outside Patuapara are at risk of transmitting the virus because nearly no one has yet had the vaccination, which is causing concerns in the area.

Mintu Pal, a potter, said, "Next week, I'm expecting three artisans to visit my studio. They haven't yet taken any vaccination. Subal Karmakar, a Nadia craftsman who arrived at Kumortuli, says, "The desperation to fill my stomach has caused me to come here to labour. However, there is still a fear of the virus spreading.”

According to Kumartuli's artisans, there were uncertainties regarding the puja last year due to the pandemic, but it was eventually celebrated because of high public demand while adhering to the COVID-19 guidelines. Even though there are fewer demands this time, the artists have already begun to work. The majority of entrepreneurs are cutting back on their budgets and are creating comparatively small goddess structures than usual.

Ranjit Sarkar, another general secretary of the Kumartuli Pottery Culture Association, has also shown concerns for other districts' artisans as they are yet to receive the vaccination.

Somnath Mukherjee, a member of an organisation in charge of making arrangements to provide vaccination for artisans in Kumartuli, said, "Durgotsab is not prohibited by the government and I'm hoping that, as last year, the state will agree to hold Pujo in compliance with the COVID-19 rules. As this time things are very different we urge everyone who is associated with the preparations for the festival to get vaccinated."

Atin Ghosh, a member of the Kolkata Municipal Board of Governors stated, "The concern right now is providing vaccines individually." However, if there are enough vaccines, Kumartuli's artisans will be given top priority.

Even after almost 2 years, people are dying every day due to this deadly virus and most cases are due to lack of precautions. It is important to enjoy life, but just as much as we are allowed, in this dire situation of constant fear and anxiety. This pandemic has changed the whole course of our lives and what was considered to be normal before is not normal anymore. The current situation doesn't allow us to create crowds or go outside without any precautions. Therefore, festivals which create huge crowds should not be celebrated without precautions since they endanger the entire country. As a result, everything should be done modestly and safely.