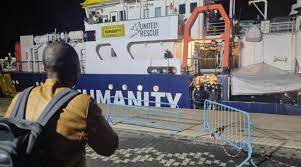 The European countries along the Mediterranean Sea have long been applying several strategies to cope with immigration, mostly from Africa and the Middle East.

However, since 2017, countries like Italy have approached the topic with a securitization mindset. And the newly elected government does not seem to differ.

As his first official act, the Minister of the Interior Matteo Piantedosi issued a directive that, charging civil ships "Ocean Viking" and "Humanity 1" for possible violations of the rules on combating illegal immigration, evaluates the application of a ban on entry into Italian waters.

This provision, like many others that have been taken over the years, underlines the absence of a consolidated, stable, and widespread system of humanitarian corridors for the most vulnerable people; the absence of a system that allows smooth legal immigration; the lack of any actual freedom of movement along the Mediterranean.

Governments know that in countries that experience different kinds of humanitarian crises, the only possibility for people who have to leave their community is to rely on traffickers and put their lives in their hands. This first step presents several difficulties, but crossing the Strait of Sicily is not easy either.

The European policies to combat "clandestine" immigration do not provide for search and rescue systems at sea.

On the contrary, they discourage them, often through the 'borderline illegal' action of the coastal states of the Southern border and through the "fruitful collaboration" with the parastatal mafia militias that form the so-called Libyan coastguards.

Except for the interventions of the Italian Coast Guard, the only occasions to save lives at sea and document what happens in the Mediterranean are the "NGOs of the sea": those associations invest experience, passion, and professionalism in the political and humanitarian action of saving people.

Despite the hate campaigns and the stubborn and suffocating criminalization of solidarity by the governments, people need to recognize that helping people at sea is more than something politically divisive, a show of humanity. It is also a necessity, a little spark in a world that seems to value selfishness over compassion.

As long as governments will see migration as a problem, the criminalization of migrants and NGOs will be seen as the only viable way to face it. However, the reality is that migration is as old as human beings; it happened during the Roman Empire, and the government saw it as an opportunity to increase productivity.

If they could do it, there is no real reason why the current government should not even consider an approach different from the one that has been applied so far.