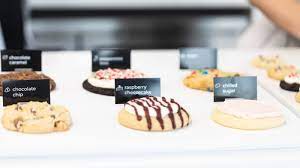 December is a time for joy and excitement for the Holidays; people are buying gifts, spending time with family, and gearing up for Christmas, Hanukkah, or Kwanzaa. Businesses, restaurants, and other establishments have been working hard throughout the holidays to provide people with services and goods to provide for the people. One of those businesses that caught itself up in hot water is Crumbl Cookie. Crumbl has been found in violation of numerous labor laws as well as being found to be a bully company in its pursuits of lawsuits.

Crumbl cookie started as a single storefront that served a rotating selection of cookies. The excitement of Crumbl is its ever-changing menu that revolves weekly, with a rotating list of cookies that sometimes match up to the holidays or just a fun new themed flavor of the week. Hence, these flavors include Pumpkin Spice, Double Fudge Brownie, or Frosted Flakes, a cookie with pieces of frosted flakes baked into the cookie.

The single storefront has turned into a massive 600-store chain across the nation in 47 states throughout the United States. This blowup could contribute to many marketing tools, but the big one was Tik Tok. The Chinese-invented app had some legal trouble recently over national security concerns. Regardless, Tik Tok is a huge marketing tool that allowed Crumbl to explode in popularity in less than a year.

From 2021 onwards, Crumbl amassed a larger-than-life cult following of Gen-Z individuals. Crumbl is currently at 6.3 million followers of a mainly Gen-Z audience.

Crumbl has been found, in six separate states, of exploiting labor laws to allow underage workers to operate and work in conditions ill-suited for younger workers. The International Labor Organization defines child labor as work: That is mentally, physically, socially, or morally dangerous and harmful to children.

The children, aged mainly 14 to 15 years old, were found to be operating potentially dangerous ovens and machinery, according to the United States Department of Labor. These ovens and machines could have landed the company in even more hot water if one of the workers managed to get hurt while working with the equipment. The six states involved are California, Minnesota, New Hampshire, Tennessee, Utah, and Washington.

The violations totaled around $60,000 in fines, $57,854 in total, according to Business Insider, which reported on the violations as well. The United States Department of Labor website broke down each location found, how many individuals were affected, and how much each store accrued for the total fine. The main culprits were San Ramon, California, and Bountiful, Utah, with nine underage workers affected, totaling $22,840 alone in the $57,840 total.

These suits come on top of multiple lawsuits filed by Crumbl to other smaller cookie companies in Utah, Dirty Dough and Crave. Crumbl has accused these two companies of trademark infringement, claiming they “copied Crumbl cookie designs, packaging, and even logos.” This lawsuit has turned into a public battle, with Crave saying their initial reaction was “complete shock and frustration.” Crave has been using this opportunity to poke back at Crumbl by posting billboards such as “Cookies so good, we were sued.” and other advertisements.

The two logos look very dissimilar, one being black and gold, while the more widespread Crumbl logo is pink and black and depicts a baker with a bite taken out of his hat, while Crave is two cookies overlapping with an edge taken out. As of the publishing of this article, the jury trial date is January 2024.

The other suit, Crumbl vs. Dirty Dough, has a more severe weight attached. Hassle has accused Dirty Dough of stealing recipes, training videos, and trade secrets. A heavy accusation to level on a brand worth not even a quarter of what the cookie giant is worth. Founder of Dirty Dough Bennett Maxwell has said, “they keep piling on other claims…they can’t sue people without merit.”

This suit has been heating up in the public eye in Utah, branded the #UtahCookieWars by locals and evermore scrutinized by the public in the sleepy state of Utah. As of the publishing of this article, there has been no set resolution between Dirty Dough and Crumble. These suits come from earlier in 2022 and have been a raging battle between the three companies since. With Crumbl fighting multiple accusations based on exploiting child labor, how will this affect their “High and Mighty” stance against the other, smaller chains?

Child labor exploitation is no joke and deals a significant blow to an ever-dangerous increase in child labor violations. In 2022, a whopping 37% increase in these violations has cropped up around the U.S. since 2021. These violations have been around for ages and have continued upward in the past few years. These reports can be dangerous as it shows how many underage workers have been exploited by big businesses to do ill-fitting work for long hours or around dangerous machines that could cause harm or bodily injury.

The message is simple, crack down on corporations trying to exploit underage workers for extended periods or allow them to operate dangerous machinery to cut corners in the labor market. Crumbl should be held to the same standard as everyone else and be held accountable for bullying and employing underage workers to participate in building their cookie empire.