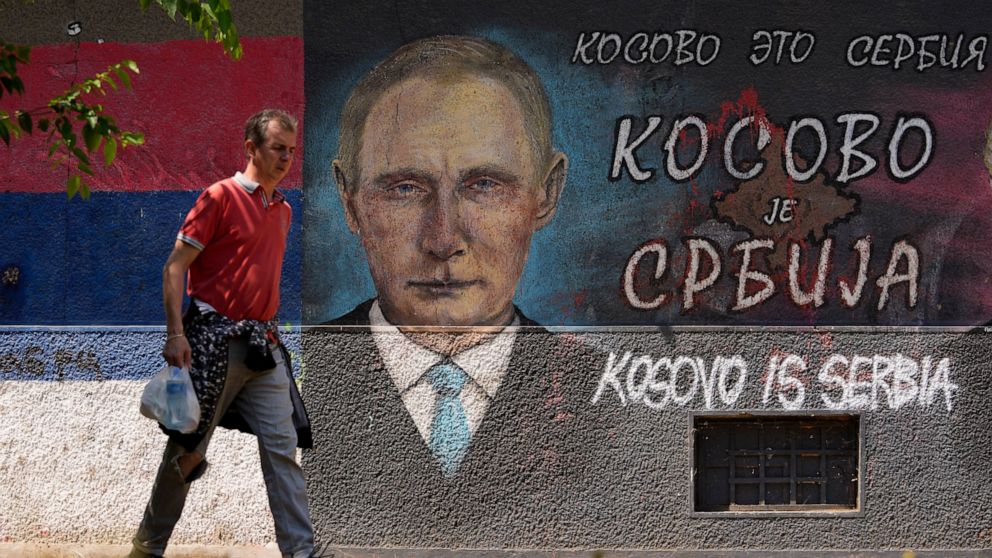 A Graffiti on Belgrade's Street - "Kosovo is Serbia." Source: The Associated Press.

Tension rekindled recently between Serbia and Kosovo over new measures adopted by the latter. This concern is replacing Serbian IDs and registration plates used by the Serbian minority living in Kosovo.

The Kosovar government said that these measures would be enabled as of last Monday, which sparked immediate unrest in Serbia and the Serbian community in Kosovo. Albin Kurti, Kosovo's Prime Minister, justified the move by claiming that it was a reaction to similar measures imposed by Serbia on Kosovar citizens entering Serbia.

Significant incidents were avoided after the timely intervention of the US ambassador to Kosovo, Jeffrey Hovenier. The diplomat required that the implementation of these measures be delayed by at least 30 days, which the government accepted.

Talks with the Eu produced the same result, with the High Representative of the EU for Foreign Affairs and Security Policy, Josep Borrell, saying on Twitter, "Welcome Kosovo decision to move measures to September 1. Expect all roadblocks to be removed immediately. Open issues should be addressed through EU-facilitated Dialogue & focus on comprehensive normalization of relations between Kosovo & Serbia, essential for their EU integration paths."

According to Prime Minister Kurti, President Aleksandar Vucic, and the head of Serbia's Office for Kosovo, Petar Petkovic, are to blame for the unrest. Vucic and Petkovic would be allegedly responsible for manipulating the media to convey the idea that the Kosovar government is preparing a crack-down on the Serbian minority in the country.

As reported by Anadolu Agency, the Kosovar PM said that "Our release of entry and exit documents at Serbian border crossings (under a new law) has not yet begun, (but) illegal Serbian structures in the north began with roadblocks and gunshots."

Additionally, he stressed that complex and challenging days are still ahead of Kosovo as the country constantly faces Serbian chauvinism.

However, the Serbian President did not remain silent on the issue. He stated that Serbians pray and ask for peace and that if Kosovo and its allied forces dare to persecute and kill Serbs, Serbia will win.

In the meantime, the NATO mission deployed in Kosovo (KFOR), operating since 1999, is on high alert.

A NATO press release issued on July 31 confirms that the situation in the northern municipalities of Kosovo is tense and that the NATO-led KFOR is working actively to implement its mandate.

The mission is ready to intervene should the unrestricted circulation of Kosovars and the environment of security and freedom be put at stake. More precisely, the press release states, "KFOR will take whatever measures are necessary to keep a safe and secure environment in Kosovo at all times, in line with its UN mandate."

Russia voiced its concerns as well. The Russian Foreign Ministry Spokeswoman, Maria Zakharova, intervened on Sunday, calling on Pristina, the United States, and the European Union to immediately stop the provocations and respect the rights of the Serbs living in Kosovo.

According to her statement, Kosovo deliberately attempts to oust the Serbian population. She pointed out that these tensions demonstrate the apparent failure of EU-led mediation and that Belgrade will not remain silent should Kosovo proceed with its demands.

Kosovo, which proclaimed independence from Serbia in 2008, has a considerable Serbian minority residing in the country's northern region. The minority does not recognize Pristina's authority and remains politically and economically loyal to Serbia.

The non-recognition of Kosovo as an independent state has always been a thorny issue in the relations between Serbia, the EU, and the US. This situation can be a serious obstacle to Serbia's accession to the EU. The country officially applied for European Union membership in 2009 and negotiations are still ongoing.

Moreover, another factor to consider is Serbia’s traditional alliance with Russia. Accordingly, Belgrade has not joined other European countries in the sanctions against Moscow. On the contrary, Serbia greatly appreciates Russia’s support in the Kosovo issue.

These are not just skirmishes between two neighboring states since both parties are backed by stronger forces. It looks like a reproduction, on a smaller scale, of the alliance dynamics currently unfolding in the Ukrainian conflict. This makes this small area of the former Yugoslavia a potential hotbed for a future proxy war.