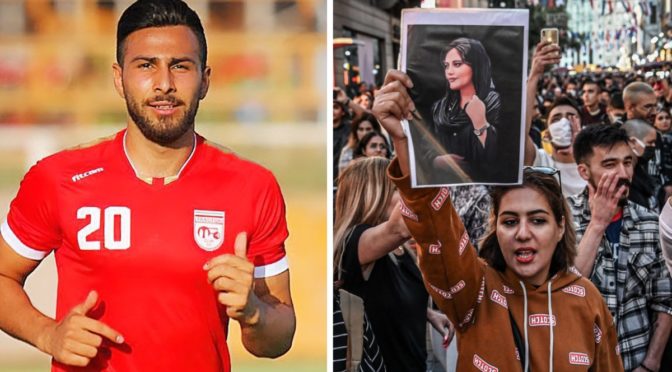 Iranian football player, Amir Nasr-Azadani, has been sentenced to death after protesting against the death of Mahsa Amini.

Amini, a 21-year-old girl, was arrested for allegedly wearing a hijab improperly. While in custody, Amini died. The Iranian coroner’s report said her death was “not caused by any blow to the head and limbs”, but witnesses reported that Amini was beaten by Guidance Patrol. Her death was officially determined to be caused by a heart attack.

The International Federation of Professional Footballers said: “FIFPRO is shocked and sicked by reports that professional footballer Amir Nasr-Azadani faces execution in Iran after campaigning for women’s rights and basic freedom in his country. We stand in solidarity with Amir and call for the immediate removal of his punishment.” 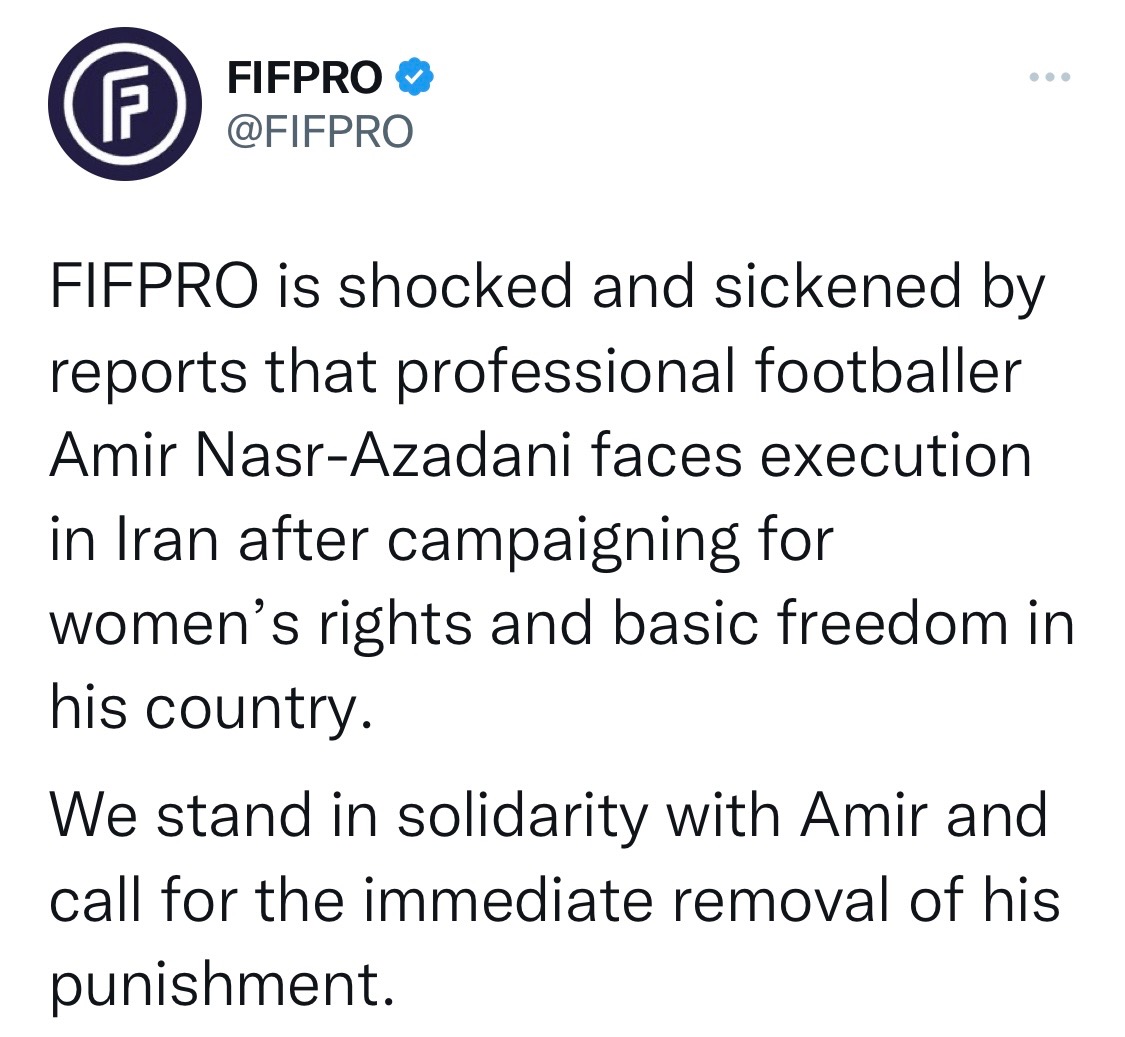 28 people have been sentenced to death due to their involvement with the protest, three of them are children.

On the morning of December 8, Iranian protester Mohsen Shekari, was executed for blocking a street and for harming a member of the pro-regime Basij militia during protests this past September. His death drew the public’s attention to the other prisoners that have been sentenced to death for protesting.

Although Shekari confessed to the crimes in a video published by the States media, the Iran Human Rights group believes that Shekari was tortured and ultimately forced to confess.

The group's director, Mahmood Amiry-Moghaddam tweeted: “Iranian authorities have executed a protester, sentenced to death in show trials without any due process.His charges: Moharebeh” for closing the street and injuring an officer with a knife. His name is #MohsenShekari – He was hanged early this morning. #IranRevolution2022”

In another tweet, he said: “Execution of #MohsenShekari must be me with STRONG reactions otherwise we will be facing daily executions of protesters. This execution must have rapid practical consequences internationally #StopExecutionsInIran #IranProtests2022.” 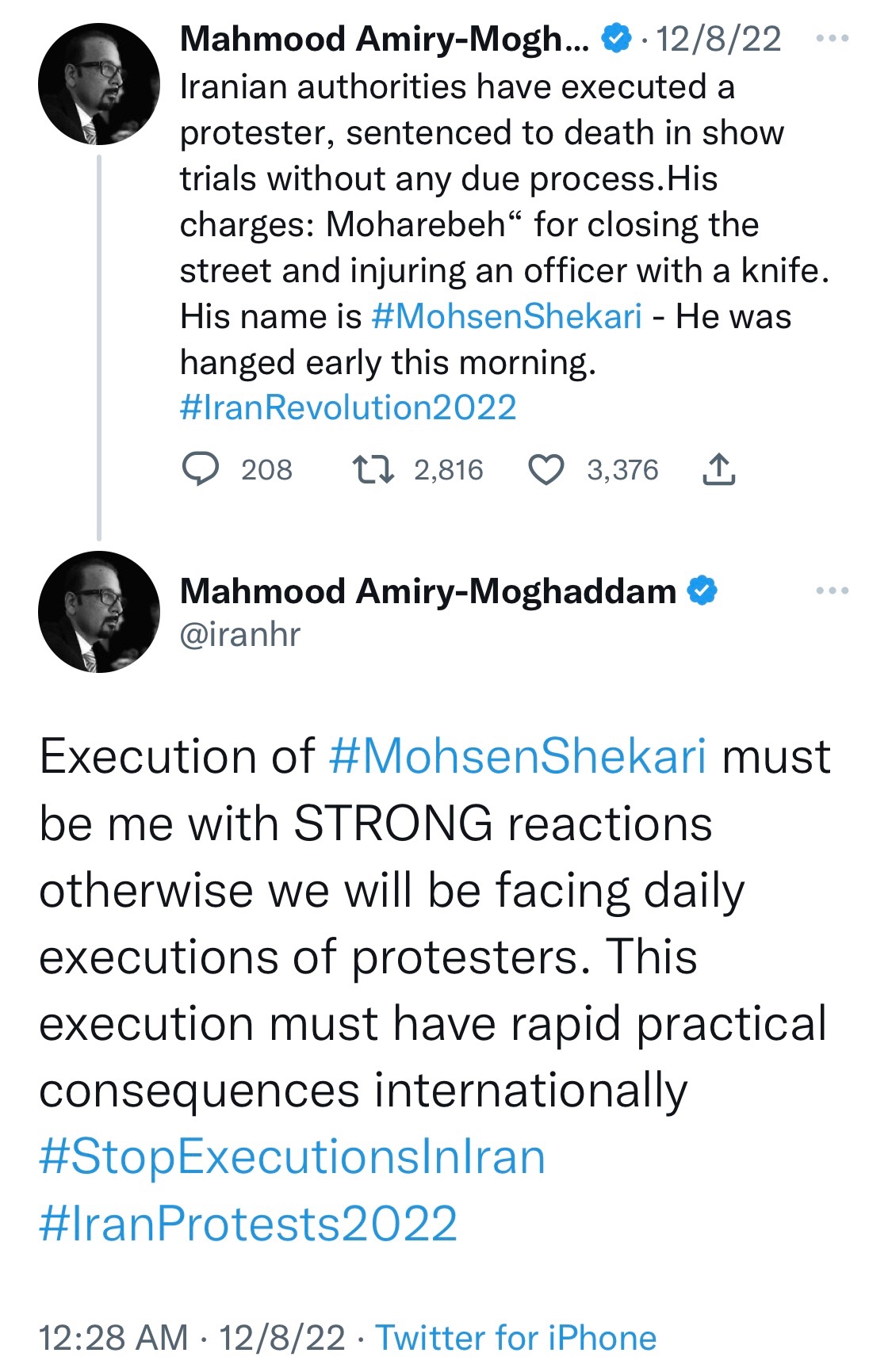 All protestors have been charged with waging war against God, enmity against Islamic rule, and spreading corruption on earth. Some have also been charged with destroying property while others are being accused of attacking police officers during protests.

Evidence of protesting has been revealed to the Islamic Republic through videos that have been posted to social media or from the protestor’s mobile phones. Along with being kept in solitary confinement, protestors have also been denied of obtaining a lawyer of their choice to defend them from the accusations.

Amir Nasr-Azadani will be hanged due to his involvement with the protest.